Warhammer 40,000: Dawn of War: Winter Assault/Between a Stone and an Axe 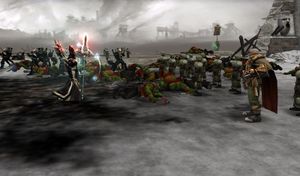 This mission is considerably more difficult than the previous ones, but if you know how to play defense it shouldn't be a big problem. Even though you face "unfair" attacks (like a Squiggoth with 30,000 health on Insane) with very limited resources, this is winnable without losing vehicles or squads. This walkthrough assumes Insane difficulty.

This is the easy part. You have to kill the Big Mek, then defend until you can relocate your base twice. Start by upgrading everything you think is useful. Get the maximum number of Guardian Squads. Don't get squad leaders for the Guardians, though, save your Power resource (no way to get more) for reinforcing the Seer Council and buying upgrades. Capture the Strategic Point in your base and build a Listening Post. Kill the Big Mek, teleport a Bonesinger southeast, build a Webway Gate there, relocate, defend until ready and gate your troops through.

At the second location, get the SP again and set up a defense. Send a Bonesinger southeast again and build a Webway Gate there straight away (before you get the objective) to save time. Stormboyz will constantly jump in to mess with you. Grenade and Ranger-snipe them to demoralize and melee them with the Seer Council. Run around until you can relocate again.

After you relocate the second time, you will be switched to the Guard. Try to get maxed-out squads before that, so the computer-controlled Eldar would be more useful. 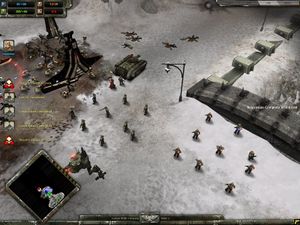 Something like this is sufficient for the first part.

You have to defend the Eldar until they relocate to your base, then defend until you get Imperial reinforcements. Your main problem is low resource income. 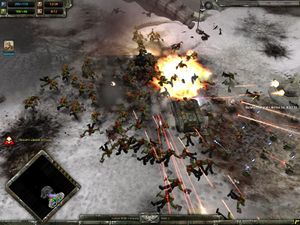 Then they'll mob you a few times...

Start by sending your vehicles and Command Squad up to help the Eldar. Put an Enginseer along to fix the vehicles. Send all your infantry to capture every SP right away, then move them up to help. Get more Engineers and build LPs as soon as possible. Fortify them up to level I and get Escalate Engagement. Build 1-2 more generators or get Improved Power Grid. After this you want two more turrets and another Mechanized Command when you can afford them. 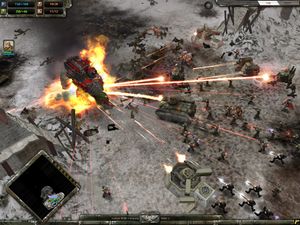 ...And finally the Squiggoth, falling to focused fire (Baneblade shooting at him from the left).

Be very selective with your production and research; you'll easily run out of resources. Even Regimental Commmand is a bit iffy and Leman Russ research is definitely out. You can actually pull through with your initial units, but a couple of extra vehicles or an Ogryn Squad would help. Be stingy, think before you click.

Up at the Eldar outpost you'll do fine with what you had. The Hellhound will demoralize charging infantry for you and the elves to finish. The Command Squad can tie them on the other side. One Guardsmen Squad and one Kasrkin Squad on each side, equipped with at least half grenade launchers. Sentinels should stay in the middle waiting for enemy vehicles (Wartrukks and Wartraks). Keep the vehicles at full health, do not lose any at this point. Do this for a few minutes and the Eldar will be done, their infantry moving inside your base. Follow them (you can take your time, killing off some tactically stupid Ork squads while you pull back) and set up a defensive line between your turrets. The Hellhound and Command Squad go to the center, the infantry to the sides and behind, the Sentinels further back to wait for tanks to show up. Keep an Enginseer close to the Hellhound. If you didn't get them yet, now would be a good time for those two extra turrets.

So now the real attacks will start and you have to hold for 10 minutes. There will be swarms of infantry with the occasional Leman Russ. You have a pretty good anti-infantry setup; when a tank shows up, two Sentinels can take it if you don't do anything stupid. Having a Psyker in your Command Squad to paralyze the tanks helps a lot (also send the Command Squad to melee them). At some point a bunch of Stormboyz will jump over your western wall and hit the Eldar; on Insane they will kill all the elves and destroy their buildings if you don't send someone over.

About 30 seconds before you get your reinforcements (a Baneblade and some Guardsmen), the Squiggoth will attack, supported by infantry and a couple of tanks. Now you can pull behind your turrets, it doesn't matter anymore if you lose some. Paralyze and destroy a tank if you can. Distract the Squiggoth and keep your turrets repaired if you can. When it reaches your turrets, focus all fire on it and attack it from behind with the Baneblade (move close enough to use all of its weapons).

The Squiggoth will die before breaching your entrance and you will win the mission. If you don't, take the Baneblade around to kill anything else you find.