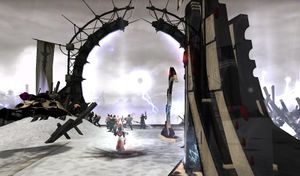 You can play this mission with either the Imperial Guard or the Eldar. You can switch sides anytime you want until one of the factions either wins or fails. Trying to support one faction with the other is pretty useless so just pick one and ignore the other. This walkthrough assumes Insane difficulty. 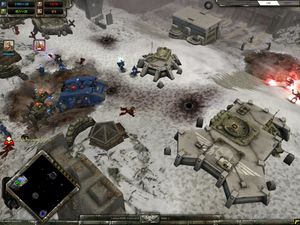 Bring the transport through here.

Your goal is to escort the Ultramarines' Land Raider from the bottom to the top and through the Psychic Shield. You can't control the Land Raider directly, but you can call it to your Command Squad (Sturnn to be specific) within a limited range. You need to use this ability to call it through the last gate. On the way you will be harassed by massive amounts of Chaos Space Marines and Orks spawning from the bottom edge. You can only build Listening Posts and Plasma Generators, but there are some structures you can commandeer to raise your Squad/Vehicle Cap. 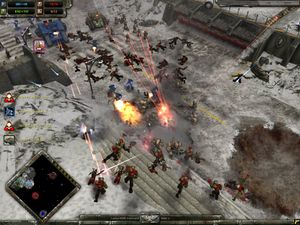 Then stop the attacks here...

This mission can be close to impossible or very easy depending on how you play it. The easy version will be described. 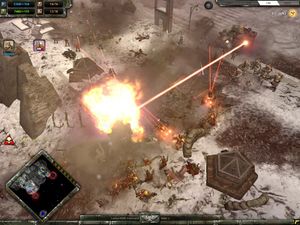 ...or here, while you win the mission up north.

Start by getting the last Sentinel and Enginseer out of the Valkyrie transport. Destroy the turrets just east with the Sentinels, then move the Sentinels somewhere out of harm's way (you can easily lose some to Horror raids and you need them shortly). Send the Command Squad and Guardsmen to clear the Chaos outpost just north. Commandeer the Imperial base by moving your Command Squad close enough. Start upgrading the base, build a Listening Post and a couple of Plasma Generators. Note the Slag Deposit just north of your base.

Now here comes the key: tell the Land Raider to move up through your base. Move a bit east behind the base and destroy the enemy Leman Russ here - go early and use your Sentinels, the Land Raider following you and the Command Squad. If you wait too long, the tank will destroy the Infantry Command here, meaning you can't raise your Squad Cap during the whole mission. When the tank is dead, set up a defense at the crossroads right next to your base. The second key: don't go east or try to capture any more SPs. Going there will only make the mission more difficult.

Now you should hold here for a bit while you upgrade a little and send your Command Squad up north along the left side to commandeer some more buildings (a Mechanized Command and a Mars Pattern Command, marked by light pillars). This has two benefits: 1) you get a higher Vehicle Cap and a Baneblade, and 2) the Horrors will attack wherever your Command Squad goes, taking pressure off your defense and making vehicles more useful there. You have to prevent the Land Raider from wandering away, however; either Sturnn must come back periodically to call it, or you can block it with a couple of vehicles.

For your defense, you want a couple of Hellhounds for the infantry masses, a squad of Ogryns and a couple of Kasrkin. Fill up your Vehicle Cap with the Baneblade and Leman Russes. For your Command Squad, take along a Guardsmen Squad (to capture the Relic and Critical Location up north, and to finish Horrors faster) and an Enginseer (to repair allied vehicles that help you along the way, and to LP that Relic).

So, when you think the time is right, just bring Sturnn back to lead the Land Raider up along the left side, the same route you took to the Mars Pattern Command. You only need one infantry squad (and an Enginseer) to help - there will be Horrors again but nothing else. All your other troops will be next to your base, blocking the enemy waves right there. You can wait until the Baneblade, or you can try to go earlier before all the fancy stuff to finish the mission faster.

You win when you bring the Land Raider trough the gate. You must first capture the Critical Location to open the gate (do this in advance), then walk Sturnn trough and call the transport to him. For winning this with IG, you get the Titan of the Emperor final mission. 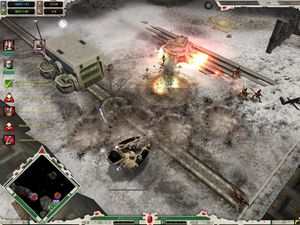 Use a Falcon to take units down from your rooftop base.

You must move your Webway Assembly to the other side of the Psychic Gate. You need to destroy the Imperials' generators to open the gate and move (teleport) a Bonesinger through to do that. 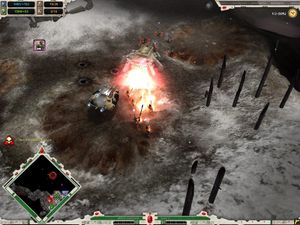 A minimal team like this can clear the small outposts while your army defends the HQ.

When you start, you are safe for a while and have plenty of resources so start base-building and getting upgrades. Two Soul Shrines will ease your life. You're right next to the Ork base, though, and have limited building space, so start thinking about the relocation.

Get some infiltrated Rangers and go check out the first relocation area. The Guard will turn hostile. Raid their base with the Seer Council, a Fire Dragon Squad (loaded in the Falcon for closing in quickly) and some Guardians. Move your base here. Get another Fire Dragon Squad and another Falcon. Start preparing a couple of Warp Spider Squads as well. Shroud your base(s).

When you start moving toward the second relocation area, don't try to go around by the western pathway. Put the Fire Dragons in Falcons to jump down from the rooftop and start destroying buildings. For the Basilisks, jump a Falcon right next to them (into cover, preferably) to unload the Dragons. Get the Relic, build a Webway Gate to move units down from your base easily. Leave the Imperial outpost just west of the Relic alone. Focus north instead to wipe out the buildings and relocate to your second waypoint. Set up a proper defense here; you should have the dough, so get vehicles, turrets and so on. You'll be mostly attacked by Imperial infantry from the northwest, though the convoy could also come this way. Build lots of stuff and you don't need to worry.

Next take a Fire Dragon Squad, their Falcon and a Warp Spider Squad. Send these up north by the right edge to wipe out the Imperial buildings - the Dragons kill the structures while the Spiders/Falcon wipe out infantry. Move on to take out the generators. Scout. You only need to clear enough safe space for a Bonesinger to walk a bit past the generator site and he's in range to teleport right past the Psychic Gate.

Teleport the Bonesinger in, build a Webway Gate and relocate your HQ. Mission won. You now get the Ancestral Powers final mission.