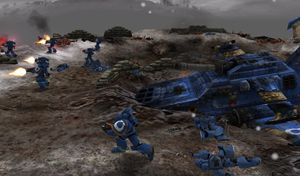 Here you must work your way through the map to relieve the Space Marines defending their crashed Thunderhawk transport and the Titan crew. Again you must control the Guard twice with an Eldar part in between. This walkthrough assumes Insane difficulty. 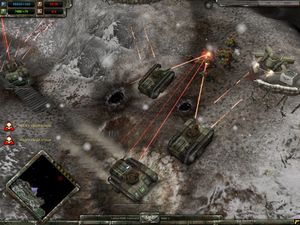 Use empty Chimeras to draw some of the fire.

The beginning is very straightforward. You move on little by little, capturing Strategic Points to take control of old Imperial structures. You need 2-3 Guardsmen Squads and the Command Squad to advance. When you get the Field Command, send an Enginseer to make Listening Posts on the points you captured before, build generators and research all upgrades. The only location where you may want to build a couple of extra turrets is the area just east of your Field Command (if you need to hold there for a while before going for the Chaos base east from there).

After repeating the same pattern for a few outposts, you reach a Chimera depot. Repair the old vehicles and build some more (they're cheap and you have the cap). Beyond this point, turrets on the ridge would chew up your infantry so you must pack them in transports. Fill up two Chimeras with squads (plus the Command Squad) - you'll have trouble unloading any more troops at the other end. You can take some empty Chimeras, however, to draw fire. Before you go, destroy the mines at the bottom by shooting from your rigde (spot them with the Command Squad). When you reach the base, your biggest problem will be a Leman Russ, considering you don't have any anti-vehicle weaponry. Have a Psyker there to paralyze it and then keep hitting it until it (eventually) dies. Kill of any other enemies shooting at you first, since killing the tank will take some time.

When that's done, there will be some Ork banners blocking your way. Draw their fire with a Chimera and shoot them up with infantry (grenade launchers and plasma guns). When you push on, you'll be switched to Eldar. 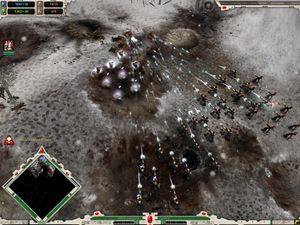 You must destroy the Ork artillery (Wartraks) blocking the Imperial Guard. This is preceded by destroying some generators again, this time in order to lure Killa Kans out of your way (you don't have anti-vehicle units so you can't realistically kill them). Fortunately, this is very easy. 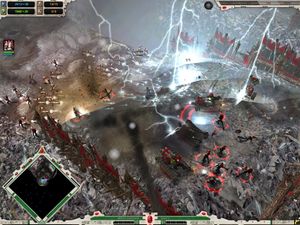 First off upgrade everything and build more Dark Reapers. You can have a total of 7 squads when you buy everything - a combination of 1 Ranger Squad, 2 Howling Banshee Squads and 4 Dark Reaper Squads should do it. The ranged units by themselves can actually finish any Ork infantry you see (the Rangers will demoralize a normal squad with two shots) but feel free to screen with Banshees for extra ownage. For buildings you need some concentrated firepower to avoid casualties as they tend to have turrets - unless you're willing to whittle them down with your Rangers while you go have a cup of tea or something.

First go north to clear the area around the first generator, but don't destroy it yet. Cheat a little by going west from there and shooting the third generator from the ridge with your Ranger Squad. Now come back and destroy the first generator. Then run back to your base when the Killa Kans move there.

Now go south from your base to destroy the second generator. Retreat a bit when the Killa Kans come again, then move north to go around them and come back south between the second and third generators to reach the Wartraks. You'll have to kill maybe two squads to get there. If you run into Kans, you're doing it wrong.

For the final fight - just attack the Wartraks one at a time with everything. Throw Eldritch Storm to start with. Your units are not anti-vehicle so it's not going to be clean, but there's no way you could actually lose. When they're all dead you switch back to Imperial Guard.

Now you need to rescue the Ultramarines. They seem to be immortal so no need to rush, they'll keep. If you didn't do it yet, there's a part where you uncapture SPs with Sentinels to disable turrets. This "gauntlet" leads to the same place you get by doing the Chimera thing described in IG part 1. The Sentinels are handy for the final part, though. You also get some Basilisk artillery you can use to bombard the enemy, but its usefulness seems questionable here.

So, there's a Chaos base between you and the Ultramarines that keeps sending Cultists to attack them. The problem is, the base is crowded with turrets (both bolter and missile) and you only have those couple of Sentinels. A simple, although not very pretty, solution is to just take lots of infantry and all your vehicles and rush the place. It'll be a chaos (pun unintended) but you'll overwhelm the base quite easily, really. Target one turret at a time and keep your Sentinels back to avoid losing them, as they are your only good anti-building weapons. You'll probably lose a couple of Chimeras and a number of infantry but not whole squads.

When you destroy all their buildings, you win the mission.