Warhammer 40,000: Dawn of War: Winter Assault/Titan of the Emperor 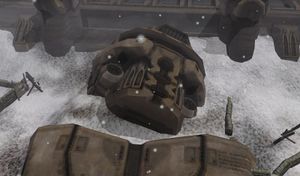 You will get this mission if you win Final Journey with the Imperial Guard. You must defend against Chaos and Ork attacks while you build Thermo Plasma Generators to power the Titan. When you finish 4 generators, Necrons will attack. When you finish 6 generators, you gain control of the Titan's weapons. The mission is actually quite easy. This walkthrough assumes Insane difficulty. 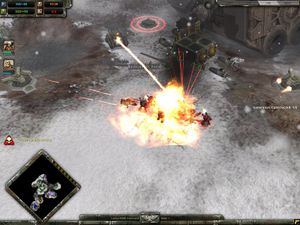 When the mission starts, send your men to capture all nearby Strategic Points right away. Start with the left and right areas (where there are 2 SPs and 2 Slag Deposits). Build your first Listening Posts and three generators (so the Necrons won't attack yet) to these areas. The enemy will go for your generators, and it is easier to defend these locations with two LPs and the free turrets. Build LPs on the other points as well - obviously you want the extra Requisition, but most importantly this allows you to move squads around quickly. 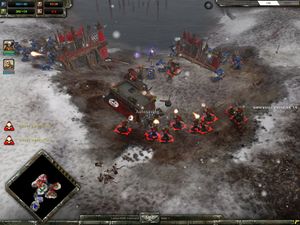 A small force can clear this out and liberate the south base.

The attacks will be infantry-based, so put a couple of IG squads and a Hellhound on each side. The Sentinel you want to save for later, and for the Marine troops you have other stuff to do. Upgrade your LPs at least to level 1 as soon as possible and consider making more turrets. This defense should hold for now.

While your other units defend the LPs and generators, take the Command Squad, Chaplain and the two Marine squads south. Raze the small Ork outpost on the way and relieve the southern base with the Mars Pattern Command. If you do this early enough, the "sieged" base will never even get attacked. Move an Enginseer over through the tunnels and repair the Mars Pattern Command. Voila, you have a free Baneblade right at the beginning of the mission.

Now you can move the units at the south base up to your main base. You could take the tanks and destroy some (or all) of the Disorder bases, but the Necrons will destroy them anyway so don't bother. 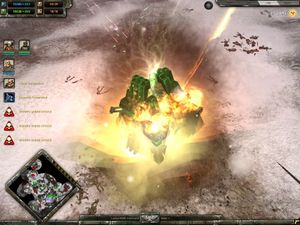 Two shots will fry a Monolith.

When your base is set, build the last three generators. Make them finish at the same time so you can start using the Titan guns right away. The Necrons will appear immediately when you finish the fourth generator. They land right in all the Disorder bases and start smashing them up, heh. This also slows the Necron advance, so you may actually be happy for not destroying the bases yourself.

You have your six generators, so all you really need to do is wait for the Monoliths to come in range. Sometimes one can approach from an angle that prevents you from shooting it until it's very close, but don't panic. They can't realistically kill you anymore. You can hotkey the Titan weapons to numbers to use them faster.

You win when you have destroyed all of the Monoliths. Congrats for completing the Winter Assault Order Campaign on Insane difficulty!