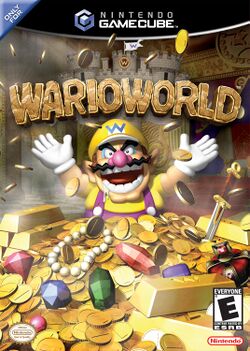 Wario World takes place on four worlds called Excitement Central, Spooktastic World, Thrillsville, and Sparkle World. Each world consists of two levels and a boss fight. The worlds are reached from a main hub area. The hub area also leads to the Treasure Square where the Huge Treasure Box is placed.

The game begins with Wario enjoying his newly built castle, which is filled with treasures that he has collected from earlier adventures. There is, however, an evil black jewel in Wario's treasure collection that awakens and destroys Wario's castle. The jewel transforms his treasure into monsters, and then turns his castle into four different worlds. After recovering his treasure from the four worlds, Wario attains the key to the Huge Treasure Box containing the Black Jewel. They engage in a battle, in which Wario is victorious, and is thus awarded with regaining his castle.