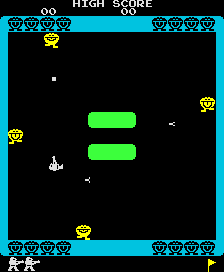 Space World (at the opening of a game)

Once you've inserted a coin into the cabinet of Namco's 1981 multi-directional shooter arcade game Warp & Warp and pushed its Start Button, the Space World will appear on the screen, with the texts "PLAYER ONE" and "READY!" above and below its warp zone; Monster Fighter shall then appear in the warp zone (and in a two-player game, the gameplay switches from one player to the other when one of them is killed). You must start the round by walking out of the warp zone and firing a shot at the Berobero to your left to kill him (while avoiding contact with both him and any bullets he may fire at you), then the one to your right as he appears, and walk downwards to fire a shot at the Berobero below you - and once you have done so, the round's first Mystery Alien (which shall most likely be a 500-point Kaeru) will appear on one edge of the screen and start making his way towards the edge on its opposite side. If you are trying to earn more points, you can wait for some of the Berobero to come closer to the centre of the screen, and shoot three of them quickly while they are orange or red to make a 1000-point Tako or 2000-point Kani appear respectively; you must also always be mindful of the positions of the remaining Berobero (and where they can attack you from), but you should not forget that you can use the warp zone to your advantage as a shield. Once the warp zone starts to flash white (with the Katakana text Wāpu ワープ in the original Namco version or the English text "WARP" in both of the Rock-Ola licensed versions), you can enter it to warp to the Maze World - but if you are already in the warp zone when it starts flashing, you shall automatically end up getting warped to the Maze World, regardless of whether you intended to visit it or not. 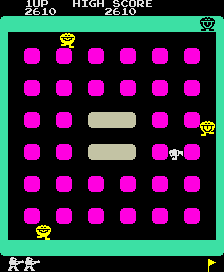 Maze World, near Round 1's conclusion

It takes a little more strategy to kill the Berobero when you have been warped to the Maze World, for timing the Monster Fighter's bombs correctly is essential while in it; you should try to walk in the same direction as a Berobero (only one row or column closer to the centre of the screen). Once you have gotten ahead of the Berobero, you should start laying bombs in advance of his arrival - and if you think that a Berobero will take longer to get into the radius of an exploding bomb you can hold the Firing Button down to increase the time delay on the bomb (you will also notice that the bomb changes colour from blue to yellow to red as the time increases). Each time you kill a Berobero in this world, your bombs will become stronger; this will obviously make it easier for you to kill the remaining Berobero but it will also make it easier for the Monster Fighter to blow himself up. Even if you clear a round in this world, the Monster Fighter will still start the next one back in the Space World - and as in Namco's own Galaxian, each of the game's rounds will be represented by a small flag in the screen's bottom-right corner (but every time you clear ten rounds, nine of the smaller flags shall get superseded by a bigger flag with the number 10 on it, and once you have cleared the forty-eighth round the flags will stop updating). The game will continue until Monster Fighter loses his last life, in which case the texts "PLAYER ONE/TWO" (which depended on whether you were the first or second player in a two-player game) and "GAME OVER" will appear above and below the warp zone, regardless of the world you were in; this means that the closest that a player can get to winning the game is by causing its score display to roll over on reaching 1000000 points.