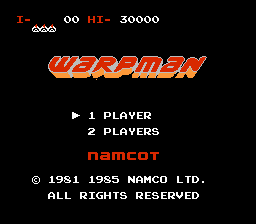 Warpman is an updated version of an older Namco arcade game entitled Warp & Warp (The ampersand was remove from the title in the US.) Warpman takes the concept established in Warp & Warp, and updates the quality of the graphics, and adds new enemies into the mix, but the goal of the game is the same. The player can occupy one of two screens; a wide open space, and a room of criss crossing corridors. In space, the player shoots a gun at enemies, while in the room, the player drops bombs behind him. The player must warp from one environment to the other (hence the name) when warping is permitted.

While Warp & Warp was converted for play on the MSX home computer systems, the updated Warpman was only released for the Famicom. Warpman never came to the US, and is little known outside of Japan.