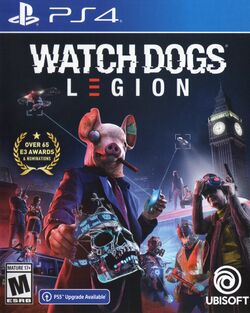 Watch Dogs: Legion is an open world action-adventure game developed by Ubisoft Toronto and published by Ubisoft. It is the third game in the Watch Dogs series. It was released worldwide on October 29, 2020 on PlayStation 4, PlayStation 5, Xbox One, Xbox Series X, Windows, and Stadia.

The game is set in London, and follows the hacker collective DedSec as they try to liberate the city from the control of Albion, a private military company that has turned the city into a surveillance state following a terrorist bombing that DedSec was framed for.

Rather than having a single protagonist, like in the previous Watch Dogs games, Legion allows players to recruit many people from all around London as DedSec operatives. Nearly any person in the city can potentially be recruited as a playable character, and different people can have different skills and equipment, so players will often have to switch to or recruit someone well-suited for a given task.