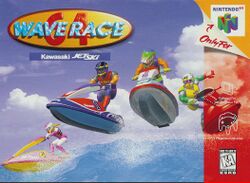 Wave Race 64 is a Racing game for the Nintendo 64 that was released on September 27, 1996 in Japan and on November 5, 1996 in North America. It is a sequel of the Game Boy game Wave Race. In Wave Race 64 the player races on jet skis in many different weather conditions, on a variety of different courses. The game featured the Kawasaki Heavy Industries brand.