Where in the U.S.A. is Carmen Sandiego?/Walkthrough

In most strategy guides, a series of steps are given on how to proceed through the game's story elements. However, because of the repetitive nature and random elements of this game, it would make more sense to go through a sample case, then give tips on how to find henchmen more quickly and more efficiently.

At the main screen, you will be in the previously mentioned city, now on your own to find and apprehend the suspect. Clicking on the "Clues" tab brings up three destinations to go to find witnesses. Each witness will give a clue about the suspect's next location and may or may not give a clue about the suspect himself. However, each time you visit a location, time passes by. The first takes one hour, the second two hours, the third three hours, and every one after the third at any given location will take three hours. Therefore, you must balance the number of locations you visit for clues with the amount of time allotted for each location.

Clues about locations only need to be specific to the state, not any particular city. For instance, if the witness claims that the suspect wants to visit Ann Arbor (a city in Michigan), regardless of what common sense may dictate, the next destination will be the most populous city in Michigan: Detroit. Once you have deduced the next location, click on the "Depart" button and the choices will pop up along with the map. Depending on the distance, the flight can take anywhere from one to seven hours. If you land anywhere between the hours of 10pm and 8am, you will take an additional nine hours to sleep, which is apparently more important than retrieving stolen national treasures. 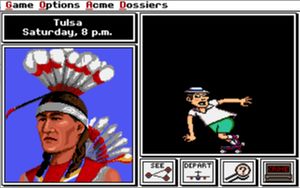 Apparently skating is a crime.

In the new city, click on the "Clues" button to bring up your witness locations. When you reach the first location, one of two things will happen. Either you will see a short cut-scene of a V.I.L.E. henchman doing various "evil" deeds, from trying to sell you stolen watches to simply skateboarding which, despite bumper stickers insisting otherwise, is apparently a crime. If you see one of these guys, don't be afraid- it simply means that you picked the correct location. If you don't see one of these guys and instead go directly to a witness who says something along the lines of "I haven't seen anything suspicious" or "That doesn't sound familiar", then you have gone to the wrong location. To amend this, you must fly all the way back to the city you came from (hopefully you remember what it was), then fly to the correct location. You want to avoid doing this, however, for it wastes much valuable time.

In each city, you will follow this same generic pattern, hopefully getting clues about the suspect in addition to his location. These clues will usually be given in a separate sentence and will include certain key words, such as "The Boss" or "The Rangers", which means that he enjoys rock music and hockey, respectively. See the "List of Clues" in the appendix for all of the keywords. When you get a clue about the suspect, click the "Crime computer" button to access the computer. Use the arrow keys to move up and down the list and the left and right arrow keys to change the entry. If you accidentally modify the wrong category, keep hitting the left arrow key until the entry is blank. When you think you have enough clues to narrow down the suspect, select the "compute" option. The computer will print out a list of possible suspects or will issue a warrant if only one suspect fits the profile. If it says "all suspects eliminated", you have made a mistake in one or more of the entries. Even if you have all entries filled, a warrant must be issued in order to catch the suspect. 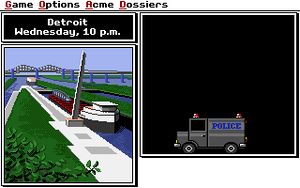 You're doing it right.

Eventually, if you follow the trail long enough, instead of seeing a V.I.L.E. henchman, you will encounter one of many weapons barely missing you, from a detonating bomb to a thrown tomato. This means that you have finally caught up with the henchman, who will be in one of the three locations you can visit. As a gumshoe, the henchman will be found after three cities, though this number increases with as your rank increases. At this point, make sure that you have a warrant issued, even if you are not completely certain who the suspect is. Making a guess at the suspect gives you a better chance than not guessing anyone and there is no consequence for guessing wrong besides a frustrated police officer snarling at you.

At this point, all that is left is to visit each of the locations until you encounter the suspect. The police will give chase and, depending on if you have a warrant issued for the correct suspect, will either return with the henchman in custody or will jog by your screen and snarl at you. The former meaning that your total closed cases increases by one, getting you closer to the next rank, and the latter means that you have basically wasted the last few minutes of your life.