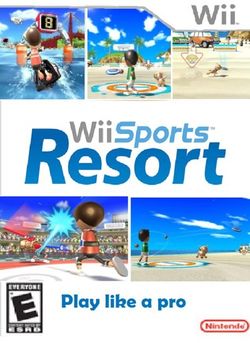 Wii Sports Resort (Wii スポーツ リゾート, Wii Supōtsu Rizōto?) is a collection of sports games for the Wii video game console and is the sequel to Wii Sports. Wii Sports Resort was released in Japan on June 25, 2009, and in Australia, Europe and North America in July 2009. The game is part of an ongoing series of games referred to as the Wii Series and requires the use of Wii MotionPlus. The game comes bundled with a Wii MotionPlus device and an extended Wii Remote Jacket, both of which are also sold separately.

Wii Sports Resort is set in a beach resort on an island called Wuhu Island, which is also featured in Wii Fit, where twelve different sports are available to play. Like the original, the sports are each played by holding the Wii Remote (and in some cases, the Nunchuk) in a manner similar to the actual sport being replicated. For example, in Archery, the player holds the Wii Remote vertically to hold the bow, and pulls back the Nunchuk to pull back the bow's string. The new feature that Wii Sports Resort brings is Wii MotionPlus compatibility, which enables 1:1 control and allows the games to be played with greater accuracy. For example, in Wii Sports Tennis, the player's shots are all determined by which direction the Wii Remote is swung like a racket. Wii Sports Resort offers a new variation, Table Tennis (previously featured in Wii Play), where the player has greater control over adding spin to the ball by twisting the Wii Remote while swinging. Wii MotionPlus is required for all Wii Remotes being used with Wii Sports Resort. Most sports with up to three or four players will allow one Wii Remote to be shared among players while taking turns. Canoeing is the one exception where a controller is required for all four players.