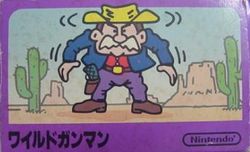 Wild Gunman was the twelfth game that Nintendo released for the Famicom, and the very first game compatible with the NES Light Gun known as the Zapper. As such, it was the pack-in game that came with the Zapper in Japan. It is based on a much older mechanical style arcade game that Nintendo sold for use in amusement centers. In addition to two difficultly levels involving a shootout with a computer generated cowboy, it also contained a mode where the player was involved in a shootout at a saloon. It was released worldwide. It was also released in arcades as Vs. Wild Gunman, as part of Nintendo's Vs. arcade system, and contained two light guns so that two players could compete.

This game is meant to be played using an NES Zapper, although a normal controller is still needed to navigate the title screen. 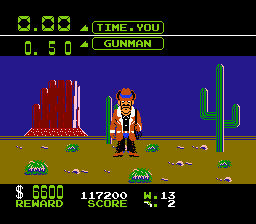 The first game is a sheer test of reflexes. A gunman will walk to the middle of the screen, challenging you to a gun duel. The moment he yells "Fire!", you must pull the trigger on the Zapper. It doesn't matter where you aim, as long as you fire at the screen, you will hit. Firing too early results in a foul, and firing too late causes you to lose the duel. Either of these scenarios will take a life away. Upon a successful hit, a set amount of points based on the outlaw's bounty is added to your score. You also gain some bonus points depending on how quickly your reaction was. The game continues indefinitely until you run out of lives, and your objective is to get as many points as possible.

The elements on the HUD are as follows: 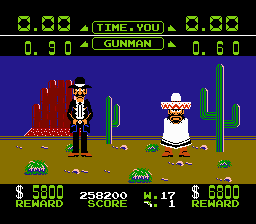 The second game involves facing two gunmen at once, one on each side of the screen. They will usually open fire at the same time, so you must shoot both of them to win. However, very rarely, only one of the gunmen will shoot; hitting the other results in a Foul. Note that if you get a Foul or failure against just one of the gunmen, you won't get the bounty for successfully shooting the other either. Precise aim is not needed, since you just need to hit the half of the screen with the gunman you're targeting to register a shot. There is a but of strategy involved in this game of skill. When faced with two gunmen, the targeting the outlaw with the lower timer is safer, but hitting the gunman with the longer reaction time first gives you more bonus points, so it's a matter of risk and reward. Remember that there's always a chance one of the gunmen won't fire, so you still need quick reflexes to succeed. 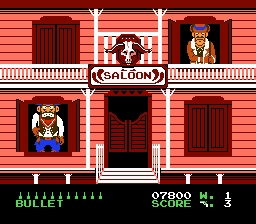 The Gang mode pits you in a salon shootout. The salon has five openings where the gunmen can appear from, and you must shoot at each of them as they appear. Taking too long to shoot can be fatal, so you need both reflexes and aim to get high scores. Enemies appear in waves, giving you short breaks to rest between them. Each gunman you hit awards a random amount of points. You only have 15 bullets for each wave, so make every shot count.

The HUD elements of Game C is slightly different: