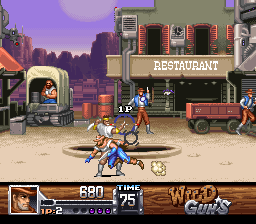 Carson City, at it's finest.

The game starts off easy, but that doesn't mean it will be. To catch inexperienced players, one of the first enemies approaches and performs a melee attack. He can be countered by pressing the fire button, but he can cost a life if you aren't careful.

The enemies in this stage are standard. From time to time, there will be a six-legged robot approaching from the side to attack. It will drop a gem if it is destroyed.

To the left of the restaurant is a small tracked vehicle. It may be destroyed for a weapon. 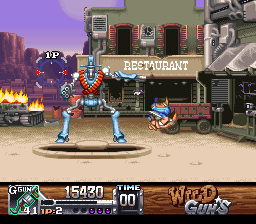 When the timer reaches zero, regular enemies will clear out, and the boss will arrive. It uses two attacks. If it points both its arms forward, it will shoot two fans of three bullets. When it points one arm forward, it is getting a bullet sweep ready, starting at its right leg and spreading just to the left of its left leg. The sweep may be dodged by a roll or a jump. 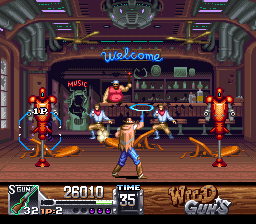 There are two regular enemies in the restaurant. The first set are cowboys that roll in from the right before stopping in position. They will shoot before rolling back. They can only be hit when stationary, and are invincible during the roll. There are also enemies ducking behind the counter, who will throw a stick of dynamite. You can pick them up, and throw them back when you are ready.

Midway through the level, two red robots will drop from the side. They only attack if you get too close, and can be dodged easily.

The boss of the level is weak, but if hit a few times, will duck down as if he were rolling. After a bit of movement, he will stand still then shoot a rather fast bullet, which doesn't give much time to dodge. He will fall to sustained fire as long as you don't attempt anything too fancy. 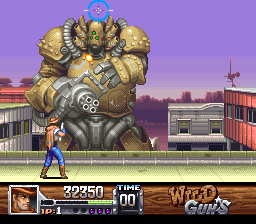 The giant robot, getting ready for the attack

The boss of Carson City is a large robot. It has one attack, choreographed by grabbing the handle on its main cannon, and a large bullet sweep. It is vulnerable to shots on its head.

Once you defeat the boss, you are brought to the stage selection screen, where you may choose from Desolation Canyon, Ammunition Depot, Gold Mine or Armored Train.