In the background, there will be a large structure appearing. After some time, it will shoot two lasoos at the player to freeze him in place. However, they are easily dodged.

The boss for this section is a gunslinger that walks back and forth, occasionally shooting bullets in a tight pattern. To avoid the shots, you should jump rather than roll. He may also throw sticks of dynamite as well.

In this part, the enemies are flying robots that will make spread diagonal shots. There are also enemies that pop out of the water to launch a mortar, and cowboys that roll on the farther bank.

The boss is a yellow version of the robotic bugs. While it doesn't fire bullets, it will throw a lasoo to hold the player in position. 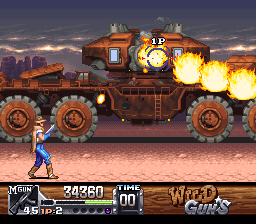 This boss alternates between two attacks. It first fires a volley of 6 mortars which are easily dodged. Next, it will aim the turret to the side, and sweep the area with fire.

To dodge the fire, wait in the center. If the flame is high, stand still. Otherwise, jump or roll to evade the stream. Once the fire reaches the other side, it may either stop or return for another pass. It usually switches between low and high, but this isn't guaranteed.

Keep aiming at the barrel. The turret will detonate once it takes enough damage.