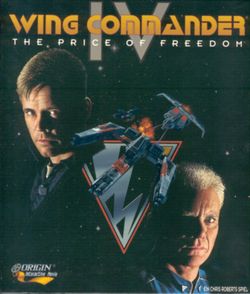 Released in 1995, WC4 was produced on the then-unheard-of budget of USD $12 million. The majority of this budget went to the shooting of its full motion video, which retained the previous game's cast and used real sets instead of bluescreen techniques. The game required 6 CD-ROMs, but was later re-released on DVD for special DVD-ROM kits. A single-sided DVD version simply repackaged the game's content, while a double-sided DVD edition re-encoded the video to MPEG2 DVD-quality.

The first game set after the end of the Terran-Kilrathi War, WC4 depicts a galaxy in the midst of a chaotic transition, with human civilians, Kilrathi survivors and former soldiers on both sides attempting to restabilize their lives. The game includes a large number of branching conversations in which the player must choose what response his character, Christopher Blair, will give; the choice may affect the other person's attitude toward your character, the morale of the entire crew, the player's next assignment and even the game's ending. As the man giving the orders, Blair often gets to choose what ship he will fly, what missiles it will carry, and what wingman (or wingmen) he will take with him.

WC4 was also the first Wing Commander game to have "redshirt" wingmen, who had minimal character development and were not important to the plot (as opposed to the flight groups of the previous three games, which contained at most ten pilots with distinct personalities). These redshirts can be killed permanently in combat, while main-character pilots always eject unless their death is mandated by the game's plot.