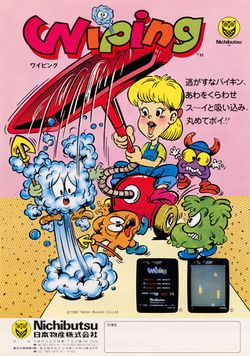 "Rug Rats" redirects here. For the series based upon the Nickelodeon television series, see Rugrats.

Wiping, later rereleased as Rug Rats, is Dig Dug-style arcade game that was released by Nichibutsu in 1982; it utilises two Zilog Z80 microprocessors (running up at 3.072 MHz) and a custom sound chip running at the same speed. The player must use a 4-way joystick to take control of a vacuum cleaner (which bears a striking resemblance to Numatic International's then-new "Henry") with a single button to make it spray soapbubbles at germs (of which there are three different types, "Baddons", "Bilbolas" and "Bigimbas"), and roll over them while they're stunned to suck them up - and it can also pass over rugs to make them roll up and squash any germs standing on them, but it can also be a victim of this.

There are also four bonus items in each stage that can be collected for extra points; once the cleaner has collected all four, a crown will appear which will make it temporarily invulnerable and faster when collected (it shall also immediately stun all remaining germs who shall then be worth twice their usual point value). The last germ for every stage is also worth 3000 points when sucked up, as opposed to its usual value - but when the game was rereleased under its new name in 1983, several of the point values were changed, and the bonus items also remained visible for the full durations of every stage.