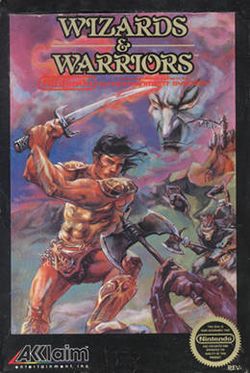 Wizards & Warriors is a platform game developed by UK-based company Rare for the NES. It was published by Acclaim and released in North America in December 1987 and in Europe on January 7, 1990. It was also released in Japan by Jaleco on July 15, 1988 under the title Densetsu no Kishi Elrond (伝説の騎士エルロンド, Densetsu no Kishi Elrond? lit. Legend of the Elrond Knight). In the game, players control Kuros, a knight from the Kingdom of Elrond, as he sets out to defeat the evil wizard Malkil, who holds the princess captive in Castle IronSpire, located deep within Elrond's forests. During the game, players make their way through forests, tunnels, and caves, battling hordes of enemies and collecting treasure, magical items, and additional weaponry to get past the obstacles and hazards that lie in their path. It was Rare's second game released for the NES, after Slalom. The game spawned three sequels: Ironsword: Wizards & Warriors II, Wizards & Warriors III: Kuros: Visions of Power and Wizards & Warriors X: The Fortress of Fear.

The objective of the game is to collect the various weapons and magic items, as well as the gems and treasure along the way; players use these items to make it past the enemies and other obstacles and hazards. Kuros can attack enemies by using his Brightsword or with other weapons and magic. He can also attack enemies while in the air or while standing by simply holding the sword in position. Players must collect gems in order to "bribe" the creature who guards the entrance to the next level; if players do not have enough gems, they cannot progress to the next level. At the end of each level is a boss creature which has been empowered by Malkil's black magic. Bosses have an "Enemy's Black Magic Power" meter which shows how many hits are required to defeat it.

Kuros has a health meter which decreases when he sustains damage from enemies. Players can replenish Kuros' life meter by collecting pieces of meat scattered throughout the levels. Players loses a life when Kuros' life meter runs out, but upon restarting they keep all the items they have obtained up to that point. The game ends when all three lives have been lost, but players have the choice to continue and restart at the level in which they lost their last life; upon continuing, players keep all their items obtained up to that point, but their score goes back to zero.

Starting in the Elrond forest, players must explore the trees - both on top and inside - to find items and to make it into the caves and tunnels. There, players start collecting the various magical items and treasure; they must make their way through caves filled with ice as well as lava. Afterwards, players fight through a second set of forests before arriving at Castle IronSpire, in which the player must go over the castle in order to enter it. The castle consists of a series of mazes in which players must use keys to open doors and possibly find other damsels which can be rescued. At the end lies the final confrontation with the wizard Malkil.

Wizards & Warriors pits the story's hero Kuros, an experienced knight against the main antagonist, the evil wizard Malkil. He was considered one of the greatest wizards in the land, such that Merlin was one of his students. However, the aging Malkil has gone mad and has started using his magic for evil. As a result, Malkil has captured the princess and holds her prisoner in Castle IronSpire, deep within the forests of Elrond. The game's protagonist, the brave knight Kuros, is summoned to venture through the forests of Elrond. He is armed with the legendary Brightsword, a sword that is powerful enough to beat demons, insects, undead, and the other creatures which have fallen under Malkil's spell. With the sword, he ventures out through the forests of Elrond and the various caves and underground tunnels and to Castle IronSpire, where he must defeat Malkil and rescue the princess.