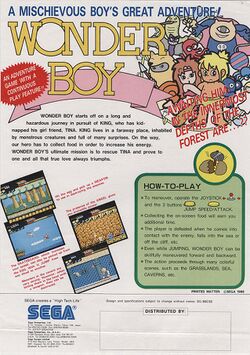 Wonder Boy is the origin of an incredibly confusing chain of games with alternating titles, sequels, and spin-offs. It began life as an arcade game, and all revisions of the arcade game are known by the original title (except for one bootleg known as Wonder Boy Deluxe which gives the operator control over the rate of health loss). Then Sega brought the game home for play on their relatively primitive Sega SG-1000 platform. One year later, they released it on the comparatively enhanced Sega Mark III system, known outside Japan as the Sega Master System. Due to the level of improvement contained by this version over the SG-1000 version, Sega saw fit to entitle it Super Wonder Boy. Since the SG-1000 version was never released outside of Japan, the Sega Master System version was simply called Wonder Boy. Sega released the game one more time for one of their own systems, the handheld Sega Game Gear. This time, it kept the title Wonder Boy in both Japan and in Europe, but the name was changed to Revenge of Drancon in the United States.

As if this weren't enough confusion, developer Escape wanted to bring the title to other platforms such as the Nintendo Famicom. Sega owned the rights to the Wonder Boy character, and would not permit him to appear on a competitor's system. However, Escape still owned the rights to the game concept and mechanics, and helped publisher Hudson Soft redesign the game into what ultimate became Hudson's Adventure Island (also released for the MSX home computer). While Wonder Boy went on to develop several popular sequels which varied in genre, so too did Hudson's Adventure Island, but those sequels were much more faithful to the original side scrolling concept. In 1987, Activision obtained the computer diskette rights for the game, and ported it to several popular European home computers, including the Commodore 64, Amstrad CPC and Sinclair ZX Spectrum. In 2004, Sega released a pixel-perfect conversion of the game designed for mobile phones.

The "Wonder Boy" in question is a character known as "Tom-Tom" - a caveman-like character whose girlfriend, by the name of Tanya, has been captured by a monster. The player must guide Tom-Tom through nine "areas", each consisting of four "rounds", there are some "hidden levels" at the end of the game that can only be reached if Tom-Tom finds and collects all of the dolls, which are a likenesses of Tanya, that are hidden in every level. The levels are made up of forests, hills, oceans, caves, ice palaces and occasionally cloud lands. The levels always run from left-to-right, with some vertical movement.

Tom-Tom can arm himself with a stone hammer, which he can throw at oncoming foes, a skateboard with which he can rush through the levels and survive one attack by an enemy, and temporary protection by a fairy which allows him to destroy foes by simply running into them. All of the aforementioned power-ups are obtained by breaking open eggs. These eggs can also contain unpleasant surprises; curses which cause Tom-Tom to lose vitality more quickly than usual, and poisonous mushrooms which reduce Tom-Tom's vitality in one go, "Bad eggs" can be easily spotted as the are covered in red spots where as "good eggs" that contain hammers, skateboards and fairies are plain white. The player must remain aware of the vitality meter, which constantly runs down at a steady pace and can only be refilled by collecting fruit throughout the level. There is also one doll to collect in each level, which doubles the bonus points awarded at the end of the level and, as already mentioned, if all dolls are collected "hidden levels" are unlocked.

At the end of every "area" (thus every four levels), Tom-Tom will encounter an incarnation of chief antagonist Drancon as a boss character. Once defeated, Drancon's mask flies off and transforms into an item such as a tea cup or a piece of fruit for Tom-Tom to collect. Drancon then subsequently makes his escape. Two players could play by alternating turns.

The Sega Master System and Game Gear ports of Wonder Boy were a direct port of the original arcade title, with some minor reductions to accommodate the more limited hardware. The SMS version of Wonder Boy featured original world designs for every fourth area that are not found in the arcade version. The Game Gear port was entitled Revenge of Drancon in North America to avoid any confusion with Wonder Boy III: The Dragon's Trap, which was released around the same time. The European Game Gear port kept the Wonder Boy title.

The graphics were lifted straight from the arcade version, but the HUD was restricted to a simple vitality bar—the score and number of lives were displayed prior to starting the level. The sound was modified slightly to adapt it to the more limited audio hardware. The controls were modified slightly to make it possible to only perform a high jump when the run button was pressed, whereas it was possible in the arcade version to perform one simply by being in motion when jump was pressed.

It also featured an Easter egg in the form of a tenth area, which could be accessed by collecting every one of the 36 dolls in the game.

The license to produce the home computer versions of Wonder Boy was awarded to Activision, who produced versions of the game for the ZX Spectrum, Commodore 64 and Amstrad CPC in 1987. The game was true in spirit to the original, although the levels beyond level 4 differed to allow for the necessary multiload system. The first round of each area was always a forest, the second an ocean, the third a cave and the fourth a forest at nighttime (The C64 had round 1 at night time and round 4 during the day) -- this was not the case in the console and arcade versions, in which the areas provided more variation (although always with these same four themes). Interestingly, the Amstrad CPC version contained the graphics used in the C64 conversion, but the sound from the Spectrum conversion. The Spectrum version contained a bug that prevented it from properly pre-loading all of the levels into models equipped with 128k like it was supposed to.

Escape/Westone had a licensing arrangement whereby they owned the rights to the game, but Sega retained rights to the main characters, bosses, and names. Because of this they teamed up with Hudson Soft to produce a conversion of the game for the NES and MSX under a new license.

To get around the licensing issue, Hudson Soft simply had the graphics of the main character and the title changed. The result was Adventure Island, which instead of featuring Tom-Tom, featured a character known as Master Higgins, who bears a slight resemblance to Tom-Tom, albeit with a hat. The game was, however, Wonder Boy in all but name. In this arrangement, once again, Hudson Soft retained the rights to the character and name, allowing them to continue to produce future games using the Adventure Island name and characters. These sequels are not based on the Wonder Boy sequels.