You control Wonder Boy throughout the game. Wonder Boy can run left or right, jump up, and climb up or down ladders. He also wields a sword, which he can swing in front of him, although it has a very short range. Wonder Boy needs to be standing right next to his opponent in order to hit them. He has a health meter, which starts off with 5 hearts. Every time Wonder Boy takes damage, he loses anywhere from a portion of a heart in health, to an entire heart from the meter. Additionally, an hour glass is continuously draining. Every time the hourglass runs out of sand, it flips over to start again, and Wonder Boy loses one heart. Wonder Boy has only one life, and the game is over once his health meter is empty, although possession of a potion at the time of death will refill up to five hearts and allow him to continue on. The health meter can be extended by up to five hearts, for a total of ten hearts. The health meter extends one heart at a time, when the player achieves particular scores. In the arcade, the first heart is gained at 30,000 points, then again at 100,000, and every 100,000 points thereafter until a full ten hearts are awarded. Wonder Boy can buy and collect various items that will help him throughout his quest. Most notably, different shoes allow him to run faster and jump higher, while different armors can decrease the extent to which Wonder Boy takes damage from an enemy. Shields can be used to deflect enemy projectiles, and stronger weapons can be obtained by defeating mini-boss enemies.

A variety of information is present on the screen throughout the game. Which information is visible depends slightly on the version you are playing. For example, only the arcade version displays the current high score. The Sega Master System version never displays the current round during game play. Information presented for the Sega Master System version is trimmed down. All of the inventory information except the sword is only visible by pausing the game and referring to the sub-screen. 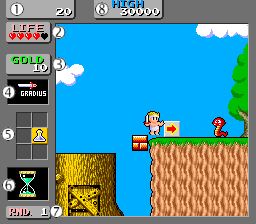