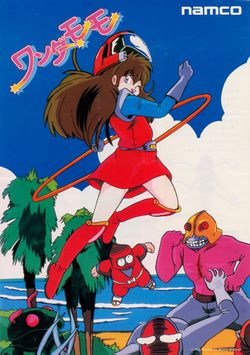 Wonder Momo (ワンダーモモ, Wonder Momo?) is a 1987 beat 'em up arcade game that was developed and published by Namco exclusively in Japan. The game is a loose parody of a typical Ultraman-style superhero series, and utilizing a then-rare female protagonist. When the game is first started, players are treated to a parody of the MGM logo featuring Momo instead of a lion and a "Modoki" instead of a mask. The game then cuts to a scene of a theater stage, where a play begins starring Momo, a young woman who gets super-powers. At this point the game puts the player in command of Momo. Rather than playing a hero who needs to save the world, the setting is that of a live stage show (set at the "Namco Theater"), and the player is actually controlling an actress who is merely playing the role of Momo/Wonder Momo. The game also features voice samples in Japanese.

As Momo, she can only attack using kicks, and in doing so builds up her "Wonder" meter. When she touches a tornado icon, or spins around by herself, she can turn into Wonder Momo and can also attack using the Wonder Hoop, which can be reused as long as she is Wonder Momo. After the Wonder Hoop is thrown, she won't be able to throw anymore, while she'll have to wait for it to bounce back to her. She can also shoot small waves of energy in whichever direction she faces (while she is crouching), which is based on the similar move by the Ultraman characters. Her most powerful attack is the Wonder Typhoon - a more powerful version of her small energy wave attack which shoots numerous small energy waves towards the left and right sides of the screen simultaneously, while she is spinning.

The game is notable for featuring some slightly risqué content for the time, in the form of fanservice (at Momo's expense). When Momo jumps, the player can visibly see her underwear. Momo also needs to be wary of photographers in the theatre audience, who are determined to get a peek under her miniskirt. If one is successful, Momo will be "embarrassed" (stunned) for a short period of time. Additionally, one of the images that appears on the theater curtain (at the beginning and end of some acts) is Momo wearing only a towel.

Wonder Momo was ported to the PC Engine in 1989, with both versions of the game later ported to the Wii Virtual Console. The PC Engine version of the game is similar to the original arcade game in that it contains similar content, but it features different arrangements of the 16 stages, along with alternate cut scenes. The game was also included in Namco Museum Encore for the Sony PlayStation and mobile in June 2005. Wonder Momo inspired a webcomic series in 2012, an anime miniseries in February 2014, and a sequel game by WayForward Technologies in May 2014. Momo herself cameos in 16-bit form as a high-score character in Tinkle Pit, as well as appearing with eight other older Namco arcade characters in Namco x Capcom.