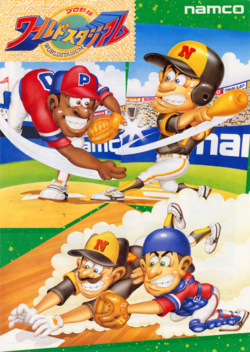 This guide is for the arcade game. For the PC Engine game with the same name, see Pro Yakyuu World Stadium.

World Stadium (プロ野球ワールドスタジアム, Puro Yakyū Wārudo Sutajiamu?, literally Pro Baseball World Stadium) is a baseball arcade game that was released by Namco in 1988 only in Japan; it runs on Namco System 1 hardware, and was inspired by the company's 1986 Famicom game Pro Yakyuu Family Stadium (which was released in the United States as R.B.I. Baseball) along with its immediate sequel, Pro Yakyuu Family Stadium '87 (both titles also later went on to beget the Famista franchise).

This is the first game for the World Stadium series; it was followed by thirteen sequels between 1989 and 2001 (and in 1992, Namco got the license to use the real-life teams from the Central and Pacific Leagues in them). Kyūkai Dōchūki (1990) and Great Sluggers (1993) both also seem to have similar gameplay to the series - and the former title features characters from Namco's first sixteen-bit game.