As usual, an Ultima game includes all the necessary information. All you need is to talk to everybody and remember or note down the information.

Ask around about the Urali. Nobody knows exactly where they live. Anyway, Apaton of the Yolaru, Aloron and his Kurak tribesmen know that an exiled Urali shaman lives in the north. 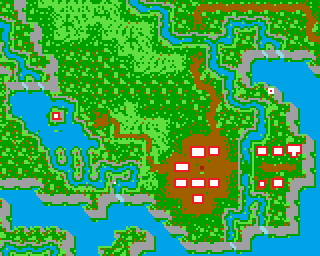 There is a fork northwards along the road between the Kurak and Yolaru villages. Cross the bridges over the canyon, then turn west. Remember what Triolo said: thus, ignore all the forks north and continue west until you reach the Barako village.

Halawa, the chieftain, usually stays on the west outskirts of the village. There is no shaman: he left long ago.

In the Barako village you can recruit Shamuru, alter-ego of Shamino and Lord British (from the main Ultima series), and of Richard Garriott (author of the Ultima series). He's a balanced fighter, with no special skills. 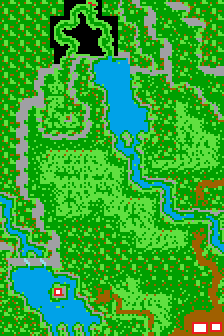 The territory of the Gigantic Ape

Halawa will agree to unite the Barako with the other tribes only if you can save her daughter Halisa from the "gigantic ape-thing". This creature lives on a ledge north of the village, near the river. 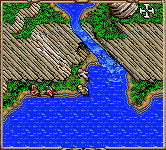 Leave the village and go north. Instead of crossing the ford, follow the river to the north-west. Soon you will see the ledge, and maybe the gigantic ape, too. Keep following the river until you get to the waterfall. Use one of Rafkin's bombs to push a boulder and gain access to the cave (see figure).

Inside the cave there is a crystal garden, where Rafkin can get more potassium nitrate to make gunpowder and bombs.

The exit of the cave is atop the ledge. Fight and defeat the Gigantic Ape (it's a normal gorilla), then find and talk to Halisa. The trial is now complete: go back to the village and ask Halawa to unite her tribe with the others.

Follow the path west from the Barako village, and you will reach the lakeside.

If you try and use the raft, the game explains that you need four characters with paddles. If you followed this walkthrough and recruited Shamuru, you have exactly what you need. Four paddles are lying near the raft.

Cross the lake: Topuru's islet is just north of the huge apatosaurus. Topuru will tell you where the Urali village is only if you bring back his mind. The shaman who magically stole it lives in the far south-west Barrab tribe, near the Disquiqui tribe where Jimmy is now.

The only useful items on the islet are the magic reagents for Triolo's spells. Keep the paddles: they will be necessary to use any other raft in Eodon valley.

You have now two reasons to go south: (1) find Jimmy in the Disquiqui village; (2) find Topuru's mind in the Barrab village.

Anyway, the Barako people told you about another stranger living in the northlands. Since you're in the north already, let's visit the other northern tribe before going south.