Worlds of Ultima: The Savage Empire/Companions

There are eleven playable characters in Savage Empire. The party is made of seven characters maximum. Four of them (slots 1-6-7) join automatically, then four slots are left in the roster for some the remaining seven.

In the table below, the attributes of the Avatar are an average of the values he can get. Modern men can use some weapons that tribesmen and lizardmen cannot.

As in almost every role-playing game, the characteristics of the playable characters can be summarized by a triangular diagram. 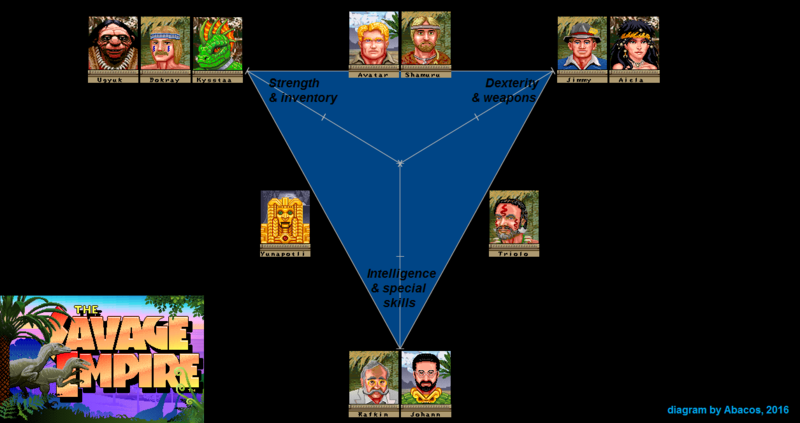 The Avatar starts at level 6; the other characters that will join him start at a level ranging from 2 to 8. The maximum level a character can reach is 8.

Experience points are gained by defeating beasts. The character who deals the final blow earns all the experience for that enemy.

Although Savage Empire is based on Ultima 6, the level-up system bears more similarity to Ultima 5. In fact, in Ultima 5, too, level-up happened while the party was resting, and attributes were raised by one unit only.