The best directions to the Disquiqui village come from the Yolaru tribesmen: "Go to city of stone where Nahuatla live. Take path south to foot of cliff. Go west. Find Disquiqui there."

Now that you found some sources of potassium nitrate, you can think about making more bombs. On your way south, stop near the laboratory and fill a bucket with tar. Then, in Yolaru village and Nahuatla city get all the cloth you can find.

Also, if Dokray is in your party, he has sufficient strength to carry a reasonable amount of spears for his atl-atl. Therefore, collect all the spears in the Kurak and Yolaru villages and in the Nahuatla city.

Drum Hill is located between the Yolaru village and the Nahuatla city. There is just one person living there, and he's an outcast from the Disquiqui village. 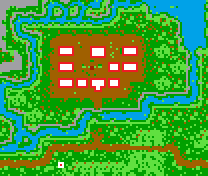 Leave the Nahuatla city and follow the road to the south-west. At a fork keep west. Soon the road will end, but there are stairs downwards. Find three flights of stairs, and you will get in a valley. Follow the valley east, and the road restats. Follow the road west, until you get to a fork: to the north is the Disquiqui village.

In order to get extra dialogue, release Jimmy first of all; then, speak to Lerei, Guoblum and Larrifin in any order, and later to Chafblum.

Sharptooth's territory is between the thicket, the road and the waterfront.

Ask Chafblum to unite all tribe against the Myrmidex. He will require two test. For the first one, just say "yes" when he asks you to drink platcha.

The second test is the real trial: you have to put a bell around the neck of a tyrannosaurus rex. Chafblum and Larrifin give you the bell

and two jugs of platcha

. There is exactly one in the village, in the hut just west/left of the prison where Jimmy was held.

After the quest is set, Sharptooth the tyrannosaurus rex can be found south-east of the village, between the road and the waterfront. Equip the spear of Shamap and go looking for the dinosaur: follow the road east through the thickest part of the jungle, then go north where the road turns south. When you find it, attack it with Shamap's spear to knock it out, then get near it and [U]se the bell on it (no experience points are gained, because the tyrannosaurus rex wasn't killed).

The trial is complete: go back to Chafblum and let him know.

Now that the Avatar found Rafkin and Jimmy, let's continue to look for Aiela. The next destination is the Barrab village, further to the south-west. There, you should look for the mind of Topuru.