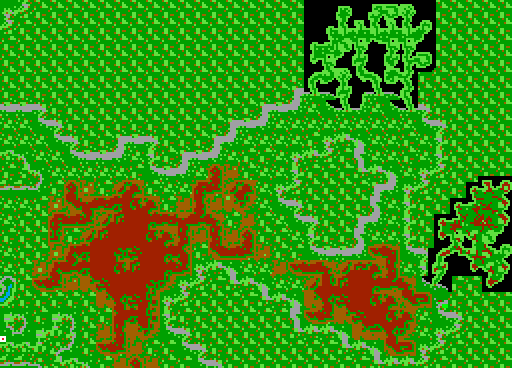 The Haakur cave (north) and the spider cave (south-east).
The Kotl teleporter near the Jukari village is in the south-west corner.

Travel north-west from the Jukari village, keeping the lava to your right and the cliffs to your left, and you will reach the Haakur tribes. All the tribesmen have the same sprite, therefore look at all of them, so that you can identify the relevant characters. Ugyuk and Grugorr are both in the western portion of the caves.

Ugyuk refuses to join if there are five or more people in the party. Anyway, he's already at level 8, so he wouldn't need to fight in battle and earn experience points.

The Neanderthal Haakur are depicted in a very stereotypical way. Modern science knows that they were more intelligent than homo sapiens, and they didn't live in caves: just a few neanderthals died in a cave, and their bones got well preserved.

There aren't many useful items in the Haakur caves. 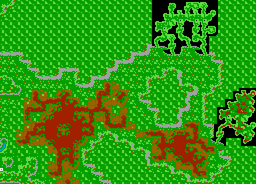 In-game map of the Haakur territory.

In exchange for his alliance, Grugorr asks you to wipe out the spiders in a nearby cave and bring back the shield of his late son Krukk. He adds that torches can burn the spiderwebs, but the Haakur are unable to use fire.

In order to make torches you need:

See the Magic and crafting page for details. Looms can be found in many villages, e.g. in the nearby Jukari village and Nahuatla city.

There is a Myrmidex nest in the center of the cave, therefore it is important that you visit the Kotl ruins before starting this quest.

Examine (look) the dead bodies found in the spider cave. You can even find another modern rifle with a few bullets in the south-east part. The shield of Krukk is on the northern side, instead.

Get Krukk's shield and bring it back to Grugorr: this quest is now complete.

All the eleven tribes agreed to unite. It is now time to build the Great Drum and attack the Myrmidex caves.