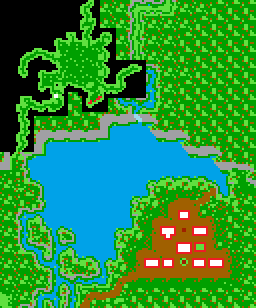 In-game map of the village, lake and Fritz's cave.

Leave the Barako village and travel east. Along the road you will see three paths that go north: the first two are dead ends, the third one (more to the east) leads to the Pindiro village.

Here you will learn something about two strangers: Fritz (the Barako spoke about him already) and another, nameless stranger who lives with the Nahuatla.

You can recruit Dokray, alter-ego of Dupre from the main Ultima series. He's an unbalanced fighter with low dexterity and high strength, therefore he's less suited for fighting than for carrying stuff.

Kunawo the shaman will trade 5 flax for 3 magic offerings (1 chocolatl, 1 pinde, 1 yopo), but only if Triolo is in the party. This is logic: Triolo is the only character who can use magic. In order to get flax, simply [U]se an orange yucca plant.

Actually, there's no trial: Inara is the only chieftain who agrees to unite all the tribes without asking anything.

Take one of the Pindiro rafts (provided you still have four paddles), and cross the lake straight west. Land near the yellow steppladder and walk a bit north: you'll find Fritz's hideout.

Items: the new stock of rifle bullets is obviously very useful; the crystal brain is a unique plot item. 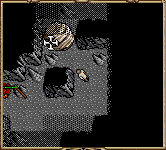 Throw a bomb where the crosshair is to clear the passage.

A boulder blocks the passage to a large dome. The passage can be opened using a single, well-placed grenade. Still, the only thing that can be found beyond is just a crystal garden.

You now have three reasons to go south:

These three locations are in succession, and the Disquiqui village is the first one you can reach.