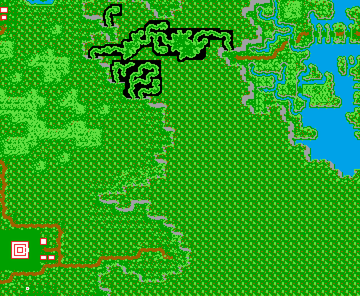 The caves between Eodon valley and Urali swamp.

After Topuru "recovered" his mind, he revealed how to get to the hiden Urali village: start from the Nahuatla city and go north-east, then enter the second cave from the north.

You can either use the Kotl teleporters or walk all the way south; the latter option is more time-consuming, but it gives the chance of earning some more experience points.

Starting from the Nahuatla city, if we split the path in two, we get two possible routes:

When you emerge on the other side of the caves, follow the path east. Soon you will reach an islet with a tyrannosaurus called Mighty Lizard. It cannot be defeated; even if you have one spear of Shamap left, the dinosaur could awaken before you get past it. The solution lies in the turtle food that Topuru gave you. Backtrack a little, get on the waterfront north of the path, and use turtle food to summon turtles (one per party member). Ride (Use) the turtles and land just after the islet of the Mighty Lizard. 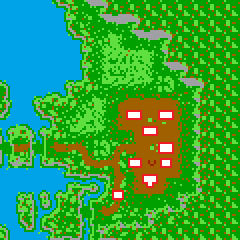 As soon as you get past the Mighty Lizard, you can meet the Urali shaman, Wamap, along the road. Unlike the previous tribes, you should ask him, not the chieftain, to unite the tribes. If you don't see him, he is likely resting in his hut, directly east of the well.

Although he's a shaman, Wamap won't heal you. That's unfortunate, because the village swarms with hostile poison-blowers. Therefore, it's vital that Triolo is in the party, holding his totems and a stock of offerings.

The caves north and south of the Urali village.

In order to unite the Urali tribes to the other ones, Wamap actually asks two things: (1) restore the idol of Fabozz and (2) kill Darden. You can complete the two tasks in any order, but it's more convenient to start from Fabozz. In fact, Darden is nowhere to be found in the village, and furthermore when the idol is restored the Urali guards will stop attacking you with their annoying poison darts.

Wamap explained you that the statue of Fabozz is held in a cave north of the village.

Walk north from the village. In order to avoid the guards, try and stay away from the waterfront. When you reach the cave, the Fabozz idol is in the south-east part, guarded by half a dozen Uralis. After you defeated the guards, talk to the idol: he will ask light. Use Jimmy's camera with flash, and the statue will magically move to its proper place in the village center. If you lost Jimmy's camera, a second one can be found in Rafkin's laboratory.

This part of the trial is complete: Fabozz lets the Mighty Lizard go away and tells all the villagers and guards that you are a friend and a hero.

You learned from Wamap and the Urali women that Darden is in a cave to the south, where he holds Aiela prisoner. The women also explained that a secret path allows to avoid most guards. Anyway, if you restored Fabozz already, the guards became friendly to you and there's no need to avoid them.

Travel south to the cave (before the cave entrance there's a step where you must move diagonally: use the mouse). Many guards are inside the cave, but they won't attack. Open (Use) the cage where Aiela is imprisoned, and Darden will appear and attack. Without the support of the Urali, the fight is rather easy.

Aiela joins the party even if there are five members already. She is a very good fighter, thanks to her high dexterity; she can carry a reasonable amout of items, thanks to her average strength.

Wamap's trial is now complete: go back to him and ask again to unite his tribe to the other ones.

Now that Aiela has been rescued, it's your duty to inform her father, Aloron of the Kurak. He'll also join the alliance of the tribes.

The giant gem carried by Aiela is the key to access the Kotl ruins and turn off the force field protecting the Nahuatla usurper, as king Moctapotli asked you. Therefore, the next destination is the Nahuatla tribe.