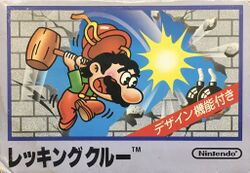 Wrecking Crew is probably the only game to feature Mario and Luigi that is frequently unassociated with the Mario brothers. A bit of a sleeper hit, the game features Mario and Luigi as construction (or rather destruction) workers, whose assignment is to demolish every standing structure in each building. With their hammers, they must strike down walls, bricks, and temporary ladders, while avoiding enemies such as walking wrenches, eggplant soldiers, fireballs, and a foreman named Spike.

At first glance, Wrecking Crew does not appear to have a lot of depth. There are 100 stages, and players can start from any stage they desire. The enemies are fairly predictable. And the stage designs can be conquered without a lot of trial and error. However, there are hidden letters that can only be discovered by breaking walls in the right order, golden hammers that can only be obtained by destroying bombs in the right order, and two layers to each stage; the foreground in which you play, and a background layer that enemies can be shuffled in to. The game even featured a design mode that allowed players to construct their own stages. However, it only saved to the Famicom BASIC tape recorder, and thus the save/load feature was inoperable outside of Japan.

Nintendo released this game in the arcades as part of their Vs. arcade series, entitled Vs. Wrecking Crew. It played slightly differently and pit two players on opposite layers of the stage for increased competition. There was also a Super Famicom sequel called Wrecking Crew '98 released only in Japan. It also included the original game as a bonus. The original was released much later for the Game Boy Advance as part of the "Famicom Mini" series. It did not see a reciprocal GBA "NES Classic" release outside of Japan.

Mario and Luigi have been assigned to a demolition team, where they must demolish every available inch of the buildings they encounter. But not everyone is happy about the demolition and someone has sent animated wrenches and eggplants to stop the brothers from succeeding in their task. Even their own foreman, Spike, tries to trip them up and prevent them from making progress.