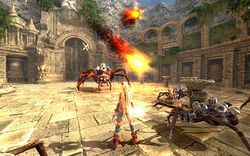 Ayumi faces off against the Spider Queen and her spawn.

Head out and go around breaking up all the pots and vases for souls. Next check under the steps on the right for a Ruby Artifact. Behind the artifact is the exit, but it's blocked by another forcefield. So for now head up the steps and go forward to the temple gates where the Queen Spider and several Spiders are waiting. Before fihting them, turn around and head for the left balcony where there is the sixth Silver Artifact piece

which will give Ayumi's Shooting Upgrade Level 2. Then head for the other balcony and grab the Soul Ruby.

Now the Queen has her Spider spawns surrounding her and a group flying insects above her. Start with the insects, as they will automatically take any damage that is intended for her, and a magic attack will fly into an insect like a magnet. If the spawns start to gang up, use a widespread spell. Try not to get too close to the Queen, as she will use her dark web to pull Ayumi in. Once all the insect are destroyed, hit the Queen with a flurry of fireballs. Eventually she will create more insects to restore her defense. Continue this until the Monster Scale is depleted and the Queen is dead. Another strategy is to use fireballs from the distance of one of the two open halls, as any of the pillars can be used as makeshift shields from the violet rays and the spawns won't leave the circular landing unless approached. With the Queen taken care of, finish off the remaining spawn. Grab what items are left over and head for the exit downstairs.