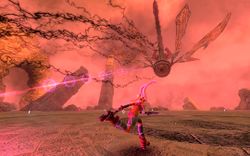 Ayumi faces off with the giant Ancient Six-Winged.

At the start, there will be in view the largest Ancient Six-Winged that has ever been seen. Head forward out into the area. The giant will be connected magically to a group of Pangos for protection. Focus on the Pangos first to break the giant's defense. One way to do so is the basic method of going and killing them one-by-one with the pistolblades. Another method is to freeze the Pangos all at once with Ice Flower or with the available Ice Crystal when they gather together. Be careful when fighting the Pangos to avoid the giant's violet ray blasts as they are more potent than those from the regular size Ancient Six-Wingeds.

If the player chooses, Ayumi can go behind one of the ruins or rocks, which allows for the killing of constant waves of Pangos for souls. Once the Pangos are taken out, hit the giant with a flurry of fireballs before he can retaliate with a violet ray. Eventually, the giant will create more Pangos to re-raise his protection. If health becomes a problem, use the available Green Crystals. There is one by the Ice Crystal and one near the shore as before. If both crystals have been used, just do several laps around the circle. Continue this method until the giant is slain. Now go around and collect any leftover items. Up on the fourth leaning ruin is a Ancient Scroll. At the edge of the coast, grab the Ruby Artifact

and head for the exit.