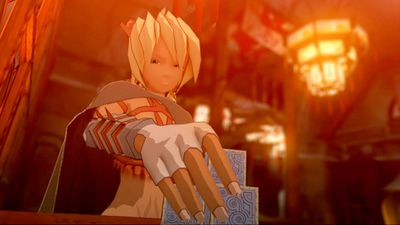 In the opening cinematic, Ayumi enters a local shop to have one of her latest finds, a crystal skull, appraised by the shopkeeper. As she browses the wares while waiting, she happens upon a relic that resembles the one she found with the skull. She takes out her relic and puts it side-by-side with the one in the shop, and the two relics snap together instantly. They shift and twirl, causing the interior of the shop to grow dark, then a Pangolin snatches the shopkeeper from behind. Suddenly, Ayumi finds herself surrounded by Pangolins ready to pounce on her. She quickly draws her pistolblades and kills the monsters, one by one. When the monsters dissipate, their souls enter the two relic pieces and transform into a single tablet that displays a glowing map and an inscription on the back:

At the beginning of time, two divine entities ruled over the universe peacefully and harmoniously. They were brothers and their rule was just – but their glory is now forgotten.

This wonderful era came to a sudden end when the seeds of conflict fell on fertile ground and one of the divinities, The Dark, tried to take all the power for himself. He plunged the world into total chaos and his brother, The Light, used all his powers to try to restore the world to the way it used to be. The Light realized that he would have to banish himself too. Only in this way could The Dark be stopped and an end put to the chaos on Earth, since both divine beings were inseparably connected to one another.


No mortal may dare to search for the artifacts which are both in a hidden location, guarded by the divine ones. The map must not fall into mortal hands – because divine power itself is bound to the artifacts. And woe to the evil-doer who dares to interfere with destiny! The artifacts are damnation to mortals and eternal darkness to the world...

Excited at the prospect of these artifacts, Ayumi ignores the warnings on the grounds that this legend might be a lie, and embarks on what she believes will be the greatest adventure of a lifetime.