Once again, your health will be extended when you board the Cyborg Rider.

This area will have a distinctly underwater feel to it. As such, you will first be attacked by what appear to be sharks, moving across the screen in waves. An S capsule will appear early on along the floor. The sharks are followed by jellyfish. When the first P capsule appears, a set of spikes will rise off the floor and approach the ceiling. More sharks will appear after that, followed by spikes which line the ceiling and drop to the floor. 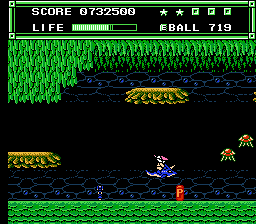 Fast moving fish fly across the screen as the second S capsule appears on a high platform. After passing through spikes moving in both directions, you will find the second P capsule which can upgrade your main weapon, allowing you to fire a second shot upward. More jellyfish appear as another S capsule appears on a low platform. Bug-like enemies rise to the ceiling while firing at you.

More fast moving fish appear, along with a third P capsule. Jellyfish are followed by sharks as the background begins to dim, and your speed picks up. You will now hurtle through darkness, where you must avoid a series of small yellow columns. The area is defended by the small bug creatures which move up and down the scren. Dodge the columns to make it to the end where you will find the boss. 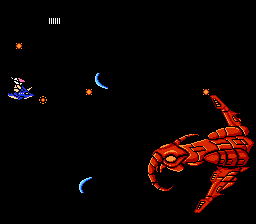 This boss resembles a cross between a space ship and an armadillo. It moves up and down along the right side of the screen, sending a trio of waves towards you. After doing this for a while, it rushes towards the left side of the screen, at whatever particular height you happen to be. You should have just enough time to move out of its way before it returns to the right side and resumes the attack.

You will need to focus on dodging its attacks while you pummel it with shots. Be on the watch for when it decided to rush you, and get out of the way before it can hit you. Then get back into position where you can fire at it while avoid taking any damage. It will take a good number of shots to defeat.