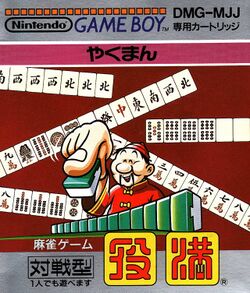 Yakuman (役満, Yakuman?) is a 1989 mahjong game developed by Intelligent Systems and published by Nintendo for the Game Boy as one of its Japanese launch titles. It is the first entry in a series of first-party Japanese mahjong games on Nintendo systems, with sequels on the Famicom, Game Boy Advance, DS, Wii, Wii U and 3DS.

As one of the four original Game Boy games available for the Japanese launch of that system on April 21, 1989, Yakuman was released alongside Alleyway, Super Mario Land, and Baseball. It is the only game of the four that was never released outside Japan. It has both a single player mode and a two player versus mode.

Japanese mahjong is a four player tile-based game where the goal is to take points from other players by drawing and discarding tiles until a winning hand is made. A "Yakuman" is a class of rare and valuable winning hands that can be composed of different combinations of tiles than normal hands. The mahjong in Yakuman is a two player variation of this game.

Yakuman supports two players using the Game Boy Link Cable. Yakuman plays like a typical game of Mahjong with options to change the A.I. difficulty and to turn off the BGM. The type of Mahjong in Yakuman should not be confused with Mahjong Solitaire, the type of Mahjong played in Shanghai. Instead this is basic Mahjong which is played with two players.