Description: Wang is similar to Pole in the arcade version, but he is much slower and therefore easier to hit. Even though he always brings the pole back before he attacks, he may kick you instead of swinging his pole. Jump attacks are more effective in the home version than the arcade version, so try to hit his body with a jump kick.

Description: Tao is quicker than Wang, but not by much. He has a special attack that allows him to blow fireballs at you. Jump over the fireballs when you see them coming and jump kick his body. Otherwise, use high kicks when he approaches.

Description: Chen is the home version of Chain. Unlike Chain, he will attempt to strike you up close, but not often. Because of this, you can't always rely on free attacks when you're inside of his range. Get as many off as you can and jump away when he begins to use his chain again. Jump over long chain attacks and jump kick his body when you get close. 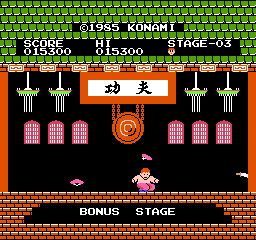 Description: To account for the decrease in the number of opponents you must face, Konami threw in a bonus stage that is unique to the home version. In this stage, you must strike as many weapons as possible before getting hit, which ends the round. Weapons will come at you in either direction in various speeds. While the highest weapons are possible to hit with a jump kick, it's easier to duck under them and concentrate on the rest.

Description: Lang is the home version of Star. She can use throwing stars against you, but if you happen to strike one in mid-air, you earn 100 bonus points. Besides avoiding the throwing stars, use the same strategy against her as you would again Tao.

Description: Mu is a quicker version of Buchu. He has the flying body attack of Buchu, but faster strikes, making him a more formidable opponent. Concentrate on using jump kicks and aim for his body, not his head, as you will often miss if you kick too soon. Defeat him and you will strike the victory gong before repeating the opponents at a higher level.