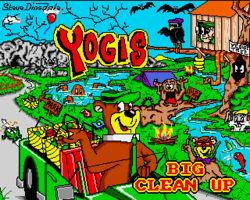 Yogi's Big Clean Up is a platform game, that had been developed by PAL Developments, for Hi-Tec Software, and released on the Commodore Amiga in 1992; it is the fourth title in the Yogi Bear series, and the player must help Yogi collect or fix items (which are represented by eight "I"s at the top of the screen). His energy is represented by a knife (to the left of the eight "I"s), and he gains it by collecting his show's trademark picnic baskets (as long as that bothersome Ranger Ned Smith is not watching), but if he should ever run out of energy, one of the three prongs on the fork (which represent his lives) will disappear - and if the last prong should disappear, the game will be over. However, Yogi will gain the prongs back at 20000 points and every 30000 points thereafter (if he does not still have all three); for the fourth level, "The Film Studio", several other Hanna-Barbera characters also appear, including Ruff and Reddy, Snooper and Blabber, Quick Draw McGraw, Snagglepuss (who's not to be confused with Mirisch Films' Pink Panther), Scooby-Doo, Top Cat and his whole gang, Hong Kong Phooey and George and Elroy Jetson. Oddly enough, Fred and Wilma Flintstone still do not appear - even though Yogi once guest-starred on their show (to steal a picnic basket when they went caravanning) in 1963.