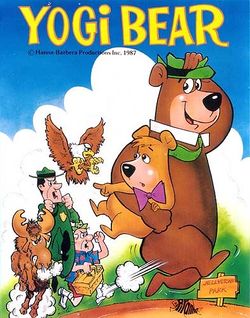 Yogi Bear is an action game that was developed by Dalali Software for Piranha and released on the Sinclair ZX Spectrum, Amstrad CPC, and Commodore 64 in 1987; it is based on the Hanna-Barbera television series of the same name which ran from 1960 to 1962 (but Yogi and Boo-Boo reappeared on The Flintstones in 1963 to steal Fred and Wilma's pic-a-nic basket when they went caravanning).

For a bear that's smarter than the average, life in
Jellystone Park should be one long picnic. After all,
everyone knows picnics mean picnic baskets! But life
has taken a nasty turn. Poor little lovable Boo-Boo
has been "bearnapped" by a bloodthirsty hunter and
is a prisoner somewhere in the Park! Heroic as ever,
Yogi is on Boo-Boo's trail. But Jellystone's
a big place and you'll have to find plenty
tasty snacks to keep our trusty bear's
strength up. Especially since along the
way Yogi's pursued by angry campers, a
furious Ranger, ferocious animals and
homicidal hunters! Time's getting short
too. Yogi's hibernation season is
nearly here. So you'll need speed
and a lot of bare (ouch!) cunning to
rescue Boo-Boo before Yogi slumps
into his slumbers.
Step into Yogi's paws and see how
long you can survive in this bonanza of
fast-moving arcade action!
© Hanna-Barbera Productions Inc. 1987