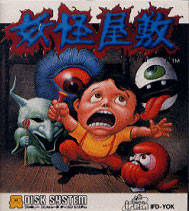 Youkai Yashiki (妖怪屋敷, Youkai Yashiki? lit. Monster House) is an action exploration game developed by Casio. It was originally published for the MSX home computer in 1986. In 1987, Irem published an upgraded version for the Famicom Disk System with better graphics and enhanced puzzles.

In Youkai Yashiki, you control a boy armed with a flashlight who must explore five stages and locate five talisman before locating and gaining access to a stage boss. The flashlight serves as a weapon against the monsters which inhabit each stage. Your life meter takes the form of a set of batteries. As your life diminishes, the batteries drain and the power of your flashlight, that is the distance that the beams can travel, decreases.

The game was never released outside of Japan, but it is completely playable by players who do not read Japanese. The only portion of the game which contains Japanese is the title screen. Nevertheless, King Mike translations has published a patch to translate the title screen into English, choosing an alternate translation, Ghost Manor. You can find the patch here.