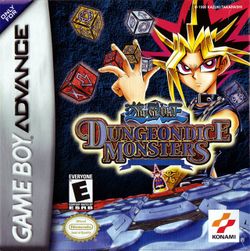 Dungeon Dice Monsters, or DDM for short, is a board game in the anime and manga series Yu-Gi-Oh!. It is seen in the manga and in the second series anime, Yu-Gi-Oh! Duel Monsters. For the translation to video game format, the gameplay is unchanged but the names of characters, monsters, and dialog are different. References to magic have been removed and the image for the Magic Crest was changed to a misshapen triangle.