This is the first game in the Zanac series. For other games in the series see the Zanac category. 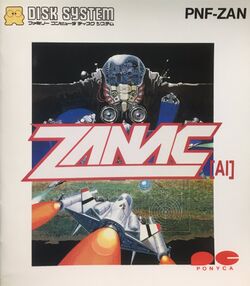 Zanac is a vertically scrolling shooter. It was designed by Compile (who went on to develop a number of classic shooters). It follows E.I. - Exa Innova, a similar, yet primitive game released in 1983; also programmed by Compile when it went by the name Programmers-3, it depicts some common enemies with Zanac and a cruder version of Zanac's famous artificial intelligence. Zanac was published by Pony Canyon in Japan, and by FCI in North America.

Zanac was initially released for the MSX computer in Japan. It was then ported and heavily reworked for release on the Nintendo Family Computer Disk System in Japan on November 28, 1986, and in the United States as an NES cartridge in October, 1987. This version was then reworked further, recolored, and released for the MSX2 system as Zanac EX. Zanac EX plays very similarly to the Famicom version, albeit with different colors, and at a noticeably slower pace. The NES version was later re-released for the Wii Virtual Console on December 3, 2007.

Zanac is notable for its unique AI programming. Player actions (including, but not limited to: firing weapons, gaining power-ups, and destroying enemy fortresses) would increase or decrease the number and difficulty of the enemies on-screen. The AI was reset at the beginning of each of the 12 levels, or when a particular enemy (the "Sart") was destroyed. Zanac is also noted (on the Famicom and NES) for its extremely high quality background scrolling and high number of visible sprites. At time, the game scrolls the background by at a lightening quick pace, and can pack the screen full of enemies and bullets, with no apparent deficit to the speed or functioning of the game.

A compilation entitled Zanac X Zanac was released for PlayStation in Japan on November 29, 2001, to commemorate the 15th anniversary of the original. The compilation included several versions of the original as well as an original sequel titled Zanac Neo developed specifically for the PlayStation. There was no North American or European release of this, nor was there a stand-alone version of Zanac Neo.

Millennia ago, an unknown alien race created a tiny device known as the "System" containing boundless wisdom and knowledge, but also vast destructive potential. If properly opened it would grant access to untold wisdom and technology, but if improperly accessed it would unleash almost unlimited destruction. Mankind attempted to access the System and failed, and the System began to spread out from the tiny Icon that contained it. Spreading throughout known space conquering and destroying all in sight, it posed a mortal danger to all life. Mankind discovered how to properly access the knowledge and technology within the System, but could not shut its destructive expansion down because of its vast tactical systems.