Since this is the very first level of the game, the intensity of the enemy attack starts out low, and does not increase tremendously throughout the area. Take the time to get used to the controls, and upgrade the firepower of the Zanac. By the time you complete the level, you should be at least at level 5 for the standard guns, and at a fairly high level of the Special Weapon of your choice. If you are very good, you can even achieve Super Guns on the very first level if you stick with Special Weapon 0. 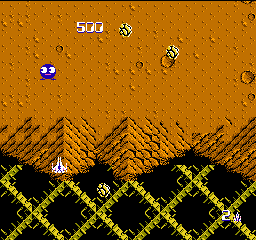 Right away, at the beginning of the game, a Sart Reconnaissance Ship will descend from the top of the screen. Do not fire your standard guns at all. Shoot the Sart with your Special Weapon. Since the number of standard shots that you've fired (zero) equals the thousands digit of your score (zero), the Sart will transform into a Blue Lander. 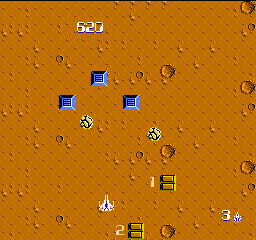 Shortly after the Sart appears, destroy a number of the Dusters that appear on the screen. Destroying 2 of them will cause the first set of three boxes to descend from the top of the screen. It is safe to assume with nearly %100 certainty, that the middle box contains a Power Chip. As a result, crash into the middle box to automatically upgrade your standard guns from level 0 to level 5, the highest level that you can achieve short of the Super Guns. (On the PlayStation remake of the game, it is usually the left box). (In second set of boxes, the left one is usually safe to run into)

If you wish to upgrade to Super Guns before the end of this level, and do it safely, than it is vital that you remain with Special Weapon 0, and continue to collect as many Power Chips as possible. You can, however, upgrade Special Weapon 0 as much as you like. At level 4, it gains the ability to destroy enemy bullets such as Leads. 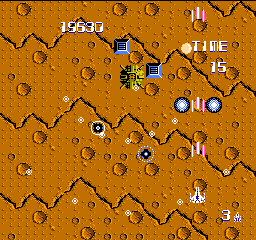 This is the simplest possible fortress. It is not even drastically different from other turrets that you will encounter on a regular basis in later areas. The many enemies that will fly around and distract you are actually a greater threat than the core itself. Simply concentrate your fire on the single Mono Core at the center of the fortress to defeat it. Upon destroying the Mono Core, the screen will flash, having a similar effect to an Enemy Eraser. You will then receive your bonus and continue on through the Area. 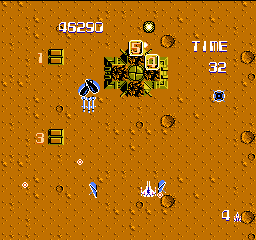 You are supplied with a number of Special Weapon options when you arrive at the second fortress. A 1 and 3 Special Weapon Distro waits to the left, while four Tank domes surround the single Round Core of the fortress. Tanks provide random Special Weapon tiles, so you must examine what they produce before rushing in to collect any of them. Even if you do decide to advance and pick up a tile, you must be careful of the core and other enemies that appear from the top of the screen.

To deal with the fortress itself, you must once again concentrate all of your fire on the lone core. A Round Core can produce strong rotating Beruos to defend itself. However, since this is the only core, it will not get any stronger, so you can knock out a good number of Beruos and hit the core fairly easily if you use both your standard guns and your Special Weapon. Defeat the fortress, creating an Enemy Eraser like flash, collect your bonus, and continue on. 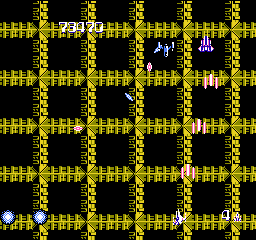 You will begin to observe a wider variety of enemy appearances. Use this stage to learn their behavior and signature movements so that you can react quickly to them in later stages, when you don't have as much time to analyze the situation. Purple Lusters and E-Fains are quite common around this area. E-Fains cross the screen and shower you with Light Bars. You can destroy Light Bars with your regular guns, so they are not an incredible threat, just don't stop firing when you see them.

As long as you are in possession of ten or more Power Chips, Sarts will no longer appear. They will be replaced by Cargos, which transfer in random Special Weapon tiles. They can still turn into Blue Landers if the conditions are just right. Always be on the lookout for a Cargo containing the Special Weapon that you wish to upgrade. If you find one, shoot it when it is mid-screen so that you have the longest opportunity to collect the tile, and only do so when it is safe. 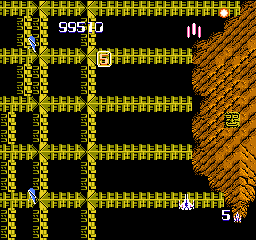 Before the last fortress, an Icon will go flying by on the ground to the right. However, this is not an ordinary Icon. Its wide grin indicates that it is a Type 2 Icon. This type of Icon releases an Enemy Eraser, at first, like all other Icons. However, if you wait a while, the center of the Enemy Eraser will hollow out and become a Warp Ball. You can take this particular Warp Ball to Area 2. However, the final fortress is just up ahead, and if you take the warp, you won't receive the benefit of the Aggression Level reset that defeating a fortress affords you. So when you arrive in Area 2 after warping, the enemy intensity will be much higher. It's much wiser to attack the fortress, increase your score, and arrive at Area 2 the old fashioned way. 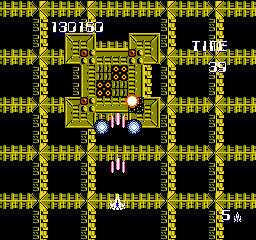 This final fortress is certainly bigger than the previous two, but is by no means the biggest you will ever encounter. Despite the large arsenal, it is actually quite easy to defeat, especially if you concentrate on taking out the four outlying Mono Cores first. By doing so, you can easily shoot out the 4 Slit Cores in the middle which only fire Light Bars at you. Since your weaponry can destroy Light Bars, it will be as if you're not being attacked at all. Still, you must be mindful of the other enemies that appear on the screen during the battle, and avoid getting shot by or colliding with them. After you defeat the fortress, the screen will flash, and you will be propelled the next Area at top speed.