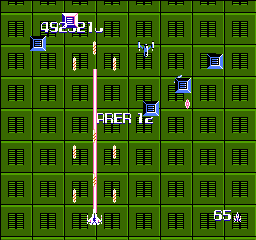 If you have managed to survive up to this point, then you surely possess the skills necessary to defeat the System and save the universe. It's all up to you at this point. The enemy is going to attack you at its most aggressive, and hopefully you still possess the firepower to respond. Some things you don't have to worry about are passing through corridors of isolated Cores, T-Cells or Type-1 E-Fains as you had to in the last area so this area shouldn't be as difficult as the previous one. But the largest Capital Ship, the Somasu is waiting to exact revenge upon you, so don't let your guard down for one second. 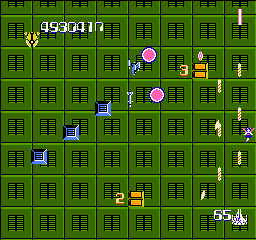 Almost immediately after the stage begins, you will be bombarded by enemy attacks. Additionally, you will see a Tile 2 Weapon Distro near the center of the screen. If you ignore it and fly all the way to the right, you should be able to dislodge the very last fairy of the whole game right around the same height as the Weapon Distro. You can collect this fairy as early as you like, since there is only one fortress to fight in this area, but it is wise to save it like any other Enemy Eraser, and only use it when you are so overwhelmed by enemies and bullets that it is your only chance for survival. 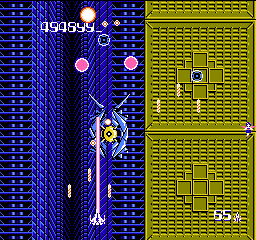 You wouldn't expect to reach the final fortress of the entire game without one encounter with a Capital Ship. And the System has sent the biggest one out of all the ships you have encountered to deal with you. Your strategy this time around should be no different than before. Focus more on your survival than defeating the Somasu quickly. The enemy won't press a large attack against you while the Somasu is around. 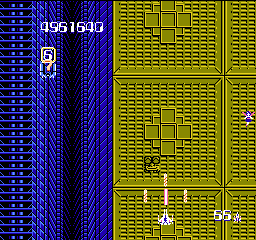 During your encounter with the Somasu (or perhaps after you have defeated it), Eye Eye will zip down the screen near the center. Forget trying to destroy it for 300,000 points, as it moves way too fast. Just make sure that you are underneath it and fire upon it before it leaves if you are not already at maximum firepower. If you happen to miss this one, don't worry too much, there is one more statue to come before the end of the stage. Note that even when Somasu is around at this point, other enemies will soon start to appear, most notably the Red Golgos! 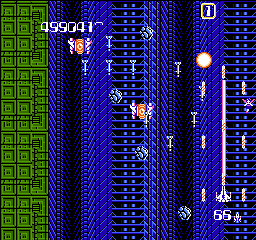 After the Somasu is dealt with, you will travel through a stretch of enemy territory where the aggression level will be at its absolute highest. Not only will the screen fill with numerous blue Dusters followed by large Egg wave, but the strongest Aerial Target, the Red Golgos who usually only appears when you collect Special Weapon 2, will show up freely and frequently, attacking you with a quintet of Sig Missiles. After Egg and red Golgos wave, there will be a small breather with type-3 E-Fains but they're followed by attack of all 3 types of Lusters. After Luster attack, most of the enemies are non-predefined but their aggression level is probably very high. Enemies will attempt to appear on the opposite side of the screen from you and attack you from the sides. Do you best to alternate from side to side and destroy each enemy before they become too much of a threat. If one side becomes completely taken over, do not attempt to clear it unless you have a very safe path to the bottom of that side of the screen. 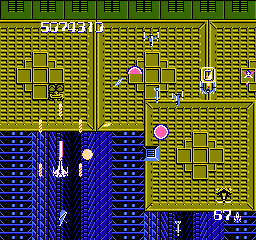 The second and final Eye Eye statue in the game occurs almost without warning. After flying over a large portion of blue background, the yellow platforms will return (about the 6 seconds after the previous yellow panel before it). As soon as they do, an Eye Eye statue is positioned on the left side. Since you get so little warning before it arrives, you will have to situate yourself in front of it's position and blast away in hopes of nailing it when it appears. This is your last chance to immediately boost to the highest level of power with whichever weapons you have equipped. Since you are finished fighting Capital Ships, if you wish to return to Special Weapon 7, now is as good a time as any. Otherwise, the laser will suffice quite nicely.

After Eye Eye, you'll enter the final section of the level where the scrolling starts to slow down. Be aware of large amounts of Sigs which appear in groups of two or three. 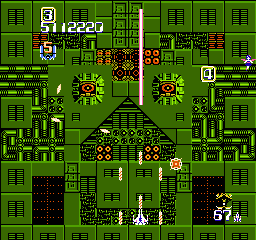 You will finally arrive at the final fortress of Area 12. While the Cores may appear to be arranged in the shape of a face, they will attack in their usual uncoordinated fashion. The largest collection of Cores is in the upper center portion of the screen, but several Cores are isolated around the sides. The two Big Cores (which serve as the face's eyes) should be taken out first, followed by the four Round Cores in the center. The remaining Cores can be taken out in any fashion. There is no time limit for this battle, but don't waste too much time or you may find yourself quickly overwhelmed. Once the battle is completed, the exterior of the fortress will explode to reveal additional cores underneath.

Incidentally, if you managed to hang on to the fairy all this time and still have not used it, use it up right away. If you complete this battle and proceed to the next one without collecting the fairy, she will disappear, and you will gain no benefit for having found her. 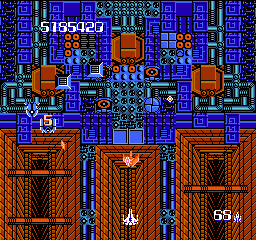 The revised fortress has a composition that is slightly easier to deal with than the earlier fortress. The Cores are closer together, and there are fewer Round Cores and weaker cores like Mono Cores. Still, you should not take this battle lightly. The cores will blast away with a very high level of aggression, so do your best to remove the most threatening cores (Big and Round) as early as possible, and leave the less threatening ones for last. Normally yellow enemies and type-4 E-Fain will appear in orange/red color during this and next battle. Completing this battle will expose the System's most vulnerable points for attack. 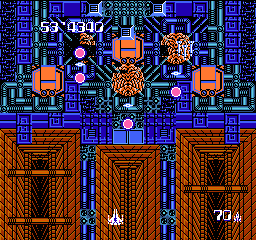 The brains fire a unique type of weapon known as Bloms. Bloms are orbs that look similar to Mios, but they move in an almost random fashion. While they generally seek out the position of the Zanac, they move in various directions. They can be shot and destroyed, but they can sustain quite a bit of damage before being removed. In addition to Bloms, brains also fire Leads. When you attack the brains, they begin to shrivel. Without their life support systems, they will never regain their size. Eventually, you can wear down the brain until all that is left is a small round turret underneath. You must blast this turret to fully destroy a brain, and you must do so to all three brains to conclude the battle against the System. 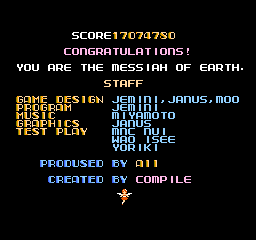 The ending is rather short and sweet, with this single screen congratulating your efforts, crediting the developers and showing you your final score. You will receive 100,000 points for every extra life that you retained at the time that you completed the game. The Japanese version of the game concluded with "SEE YOU AGAIN, IN GUARDIC", a reference to their forthcoming game at the time. The PlayStation version of the game replaces this text with "SEE YOU AGAIN, IN ZANAC NEO", the direct sequel to the original Zanac contained on the Zanac X Zanac disc.