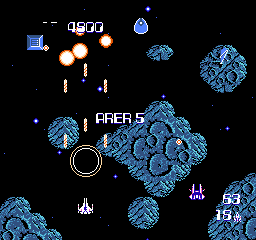 The fifth area takes place in the near emptiness of Outer Space. This region is populated by a series of asteroids, upon which the System has placed a number of turrets. Even though you primarily fly through space, be prepared to face attacks from both flying and ground enemies.

A few moments after starting the area, you'll be assaulted by a group of Type-1 E-Fains. You may notice that it is easy to spot the E-Fain ships that ordinarily occupy the background layer before they fly high enough to attack you and be attacked. Since there is no background layer, you will see the E-Fain clearly long before they are able to be destroyed. They will appear purple until they rise high enough to become blue. Then you can attack them. 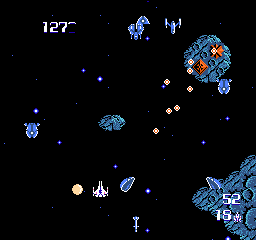 As said above, you will be facing the combination of ground and flying forces. Although this shouldn't alter your survival strategy dramatically, the areas that contain an increase in turret activity will flood the screen with Lead bullets if you do not destroy the turrets quickly. If you have a Special Weapon that can destroy Leads, then proceed as you normally would. If not, be sure to make turrets a top priority to defeat. 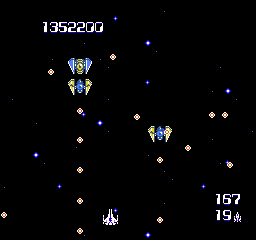 When you reach the section of empty space before the capital ship, you will begin to face a squadron of Golgos. Both blue and yellow Golgos will appear, with similar but distinct attack patterns. Once again, if your Special Weapon can destroy Leads, you can pick them off at your leisure. If not, you will have to carefully aim your shots at the Golgos while weaving in and out of the bullet paths. Destroy the Golgos (especially blue ones) as quickly as you are able to without getting killed. More follow shortly after prior Golgos are destroyed, but you are safest from the Lead attacks when the Golgos are higher up the screen. 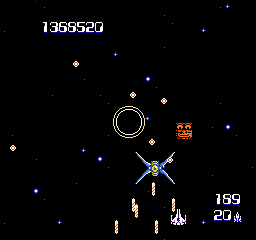 Rather than destroying a series of fortresses, you'll have to deal with the Hume Capital Ship for the first time. The Hume is not entirely dissimilar from the Maseru that you faced earlier in Area 2. However, the Hume does not warp and teleport about the screen. Instead, it slowly tracks the position of the Zanac ship and moves in closer and closer in an attempt to collide with you. Fire as much as you can at it from underneath, and move to the top of the screen when it gets too close. Lure it back up to the top, and slide back underneath it to continue firing at it.

Shortly after the Hume appears, an Eye Eye statue will zoom down the right side of the screen. If you do not have Super Guns at this time, make sure that you hit the Eye Eye on the way down in order to upgrade your firepower. This will substantially help you in fighting the Hume. It is considerably difficult, but not impossible, to earn the 300,000 point bonus for shooting at the Eye Eye long enough before it disappears off the bottom of the screen. 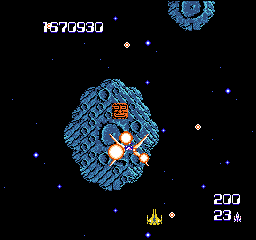 Not long after the Eye Eye appears, a Type 2 Icon will appear as the lone structure on a relatively large asteroid. The screen will still be scrolling relatively quickly here, and you may very well still be fighting the Hume at this point. The only reason to concern yourself with the Icon is if you wish to warp to Area 6. Unlike the other Type 2 Icons that you have encountered in the past, this Icon actually provides a bit of a shortcut, since you are only half way through the area. If you wish to warp, be sure to knock an Enemy Eraser out of the Icon, and wait for the eraser to hollow out and become a Warp Ball. Then jump in to advance to the next stage. 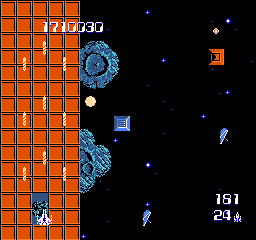 In a manner similar to the previous area, you will reach a section where you will be confronted by turrets on either side of the screen. When the left side of the screen is occupied by a large red platform, turrets will appear at regular intervals on the platform, and on isolated asteroids on the right side, effectively attacking you from both sides. Once again, choose a side and remain there to destroy half of the turrets as quickly as possible, while avoiding all incoming fire from the opposite sides. 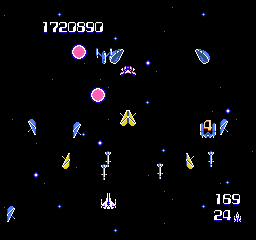 Once you clear the large red platform, Degids will begin to attack you from the top and bottom simultaneously. Get used to this behavior, because it's going to happen quite frequently throughout the rest of the game. When this occurs, it is best to remain as close to the center of the screen as possible, and continuously adjust your vertical position so as to lure the Degids to join together early. You can then pick off each half as they approach, or wait for them to join up and destroy the combined unit. Moving in a small circular motion can also help throw off the Degids and put you in a better position to destroy one or both halves. If you lure a Degid into joining beneath you, be sure not to fly back down and get caught between them. 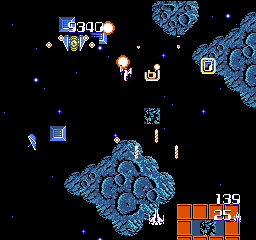 Naturally, the enemy's attack level will increase the closer you get to the final fortress of the area. Many of the enemies that you have encountered earlier will combine to attack you en masse. It is not uncommon for a Blue Golgo to sneak in and join the attack, although you will probably be shooting so frequently, that you will rarely have an opportunity to make out one destroyed enemy craft from another. 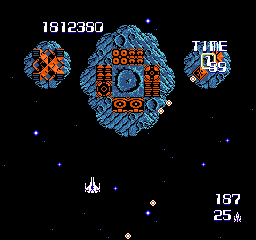 With a total of eight cores, this first and final fortress of Area 5 is another record breaker in terms of core quantity. However, as most of the cores are neatly grouped together in the center, this shouldn't pose too much of a problem. You may be tempted to attack the turrets that occupy the smaller islands on the side, but this isn't necessary. You only need to concentrate your attack on the cluster of cores in the middle. It's still useful to eliminate the turrets on the right since they fire Leads.

This fortress marks the introduction of the Big Cores. Big Cores are capable of firing both Leads and Light Bars, and they become incredibly aggressive if they are left as one of the last remaining cores. Fortunately for you, they are positioned right in the front, and are likely the first cores that you will remove. Nevertheless, pay close attention to the order in which you defeat the cores, and destroy the Round Cores rather quickly as well, so as not to become overwhelmed by Beruo orbs that they send out.