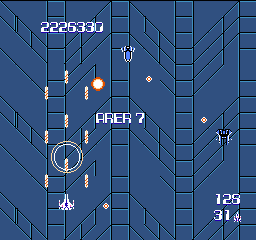 The seventh Area takes place back up in space, as you travel through an immense sequence of high speed transport tubes. The scrolling on this stage will be some of the most intense in the whole game, but don't let that prevent you from focusing on your survival. Fortunately, this Area is easier than Area 6 in terms of difficulty and enemy aggression. Alone with area 2, it is also one of the shortest lasting areas. 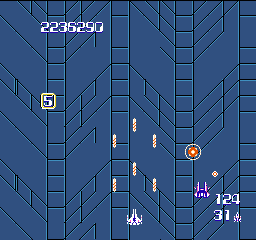 Through the first portion of this area, you will be primarily facing a deadly combination of two dangerous enemies. Purple Lusters have a unique behavior that sends them across the screen in a wide arc, ending with a sweep back across the bottom of the screen, where you are likely to be attacking enemies from. After several purple Lusters, Valkyries will warp on to the screen, and cannot be attacked until they have completed their arrival and begin to slowly chase after you. Neither enemy is incredibly challenging to deal with, but the combination of them can cause you to focus on the newly arriving Valkyrie while a Luster streaks across the screen in an attempt to crash into you. Focus on whichever enemy is a more immediate threat. 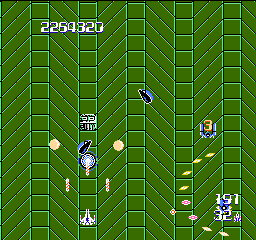 When you start flying down the green section of the area, a long string of Icons will appear down one chute along the left half of the screen. Their large numbers allows you to summon multiple Enemy Erasers, but they move extremely quickly, so you must focus your fire in just the right spot to make them appear. You will want to save a couple of these Enemy Erasers for the battle to come or sections after the battle. 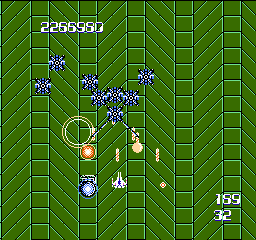 You will begin a battle with the next Capital Ship, the Soreido. It appears to be composed of three hard bolts with two antennas attached to the front. It moves very much like the Hume and the Girevu, slowly tracking you across the screen. At the same time, it unleashes huge numbers of Super Hard Bolts all over the screen. This is why you saved a few Enemy Erasers. Employ the usual strategy of firing beneath the Soreido until you run out of room and have to fly to the top of the screen to lure it back up. As you fly back up, grab one of the Enemy Erasers to clear the screen of the bolts. Do this as many times as you need to before you can fly back down below the Soreido and resume your attack. If you manage to destroy Soreido early, this section will be one of the most quiet ones in the game with only occasional Sart or Cargo appearing. 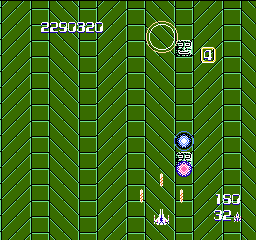 Towards the end of the battle with the Soreido, or perhaps even after it has been defeated, depending on how efficiently you attack it, the frequent Icon appearances will repeat. Except this time, they will be on the right side, and they will be Type 2 Icons. It is rare for a stage to contain more than one Type 2 Icon, but this one contains four back to back. Not only that, but each Icon's Warp Ball will actually send you to a different area, and two of them will actually send you backwards! So care must be taken. In order, the Icon's Warp Balls will send you to Area 4, Area 8, Area 9, and Area 5. This can be a fast way to advance ahead two areas, but it's risky since, not only is it difficult to time your shots to hit a specific Icon, but if a number of Enemy Erasers have already appeared from previous Icons, it can be difficult to know which Icon produced which eraser. 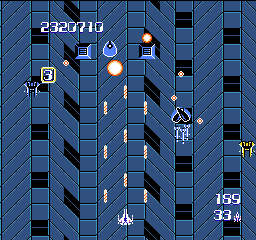 The final section of the game will throw an incredible arsenal of enemy craft at you. In addition to the usual cast, you will face both the Blue and Yellow variety of Lusters at the same time. Yellow Lusters zig-zag back and forth down one side of the screen, rather quickly, and flood the screen full of Leads. Blue Lusters, who you will be more familiar with, will also fire a good number of Leads. If you have a Lead defeating Special Weapon, you won't be in too much danger. If not, you will want to dispose of these two enemies as quickly as possible, so as not to become overwhelmed by bullets. If you have kept an Enemy Eraser which are still onscreen, you might want to use it as soon as yellow Luster appears stopping additional Lusters from appearing. 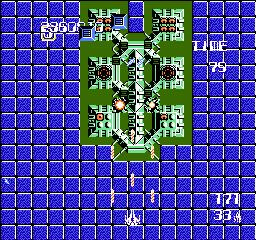 Despite the intensity of the enemy attack throughout this stage, the final and only fortress of Area 7 is not too difficult to defeat. All six cores are arranged in two columns of three cores each, allowing you to make quick work of one side or the other by remaining stationary below each column. If your weapon cannot destroy Leads, you will be forced to move from side to side at various intervals, but you can stick to this strategy for the most part and destroy the fortress rather quickly.