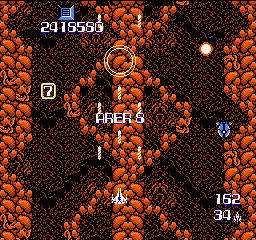 Area 8 is rather unique, in that it appears to take place inside of a large biological entity. In fact, while many of the enemy craft that appear to destroy you are typical mechanical types, you will face a new enemy that is purely biological in nature. One aspect of the stage to be aware of is that it is predominantly red, and these new biological enemies blend in rather well with the background. Pay attention to their movements and learn how to distinguish them. This area also has lots of Type 1 Ground turrets and since the screen scrolls in rather relaxed pace, they have time to fire at you. 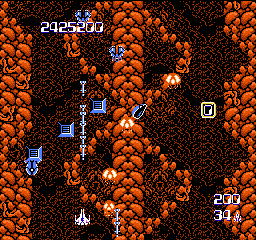 The new biological enemy that you will begin to face are the T-Cells (or Carlas as they are known in Japan). These strange organisms have evolved to absorb a wide spectrum of energy, including all manner of weaponry discharged by your Zanac ship. This means that no matter how many times you shoot at it, they will never die. What's worse, they will prevent any of your weapons from passing beyond them, protecting all enemy craft positioned directly above them. So how do you deal with such a menace? As advanced as the T-Cells have become at absorbing energy, their tissue is extremely fragile. As a result, the one form of attack that they can not withstand is a direct collision with your ship. T-Cells are the one enemy that you can freely crash into without harm. This has the effect of removing the T-Cell from the screen. But you should do so very carefully, as attacking them without proper planning can have grave consequences. 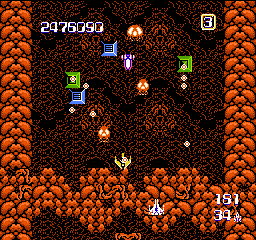 You will find that if you do not plan ahead properly when dealing with the T-Cells, which appear at a near constant rate throughout the area, you can put the Zanac in jeopardy, and lose all of the firepower that you worked so hard to attain. One such area where this is evident is a location where two green turrets can be easily seen scrolling down the screen. These turrets release a large number of Lead bullets, and while it would be nice to remove them quickly, chances are that a T-Cell will get in your way and prevent you from destroying them. Your first instinct may be to crash into the T-Cell in order to stop it from preventing you from destroying the turret. However, by the time you make this decision, it's not uncommon for the T-Cells to be surrounded by Leads. If you rush in and try to destroy the T-Cell, you may unwittingly crash right into a bullet. Even if your weapon is capable of destroying Leads, they will not be as effective since the T-Cell will absorb the shot. Plan the removal of T-Cells very carefully. 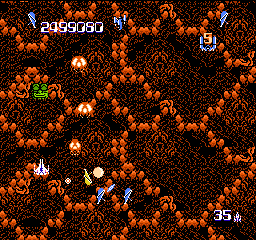 A little while after the two turrets scroll by and both types of Degids start to attack, you will find an Eye Eye statue on the left side. This can be used to max out your standard and special weapons. You will see a Tile 5 Weapon Distro shortly before the Eye Eye. Even if you have favored Special Weapon 7 up until this point, it is highly recommended that you switch to weapon 5 just before you encounter the Eye Eye, and then use the Eye Eye to upgrade Special Weapon 5 to it's highest potential, in the rarely seen form of a laser beam. Although this laser beam is not as wide as Special Weapon 7 at its highest level, nor can it be directed, it is fast and powerful, it has no usage limit, and it can even shoot through Capital Ships without being reflected. Only an expert player can wield Special Weapon 5 as effectively as Special Weapon 7, but it only takes a little practice to get the hang of it. 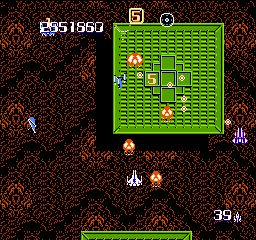 Throughout the middle of the stage, it is not uncommon to find the number 5 appear next to what looks like a missing Weapon Distro. The fact is, the distros are present, they are just hidden. Fire at the platforms anyway. You may be surprised to find more than one distro per platform. This area seems to heavily promote the use of Special Weapon 5. For all the reasons mentioned above, this weapon is well worth the investment. However, if you did not use the Eye Eye to advance the weapon to its most powerful state, you may find it a lot more difficult to accomplish the same thing by simply collecting the tiles. If you are not confident in your ability to use the first form of Special Weapon 5 (the Rewinder), you may wish to stick the a weapon you are more comfortable using. Already possessing Special Weapon 5 will allow to pick up them to gain invulnerability for quite a while.

In addition to hidden tiles, there are also turrets firing Leads hidden in the same kind of platforms be aware of them.

Also form this point until almost the very end of this level, E-Fains won't leave you alone. The most common type appearing here is type-1 E-Fain which is especially hard to destroy in this level due to T-Cells in addition to usual characteristics of Type-1 E-fains.

If you die and stumble across Special Weapon 6. it's not unwise to pick it up. Since Type 1 Effine and T-Cell come only in certain times, it stops their waves if a screen is cleared, making the stretch towards the final fortress and fortress itself much easier. 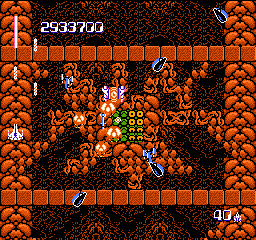 You will find not one, but two such occurrences of a false fortress. These four Combo Cores grouped together in the center of a biological mass foreshadow the ultimate fortress fight at the end of the stage. But the purpose of their presence early on in the stage is simply to fill the screen with bullets as they pass by. You can eliminate one, possibly two or if you're very well-armed, all four of the cores as they zip by, but it is not necessary, and you shouldn't put yourself in jeopardy just to accomplish this. 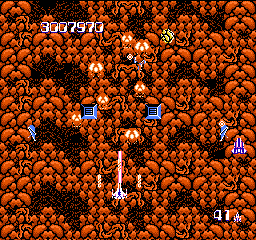 As mentioned before, the T-Cells have an unfortunate knack of blending in with the background. This is true no more so than towards the very end of the stage, where the biological growth reaches its peak. You must continue to advance on the T-Cells wisely, so as not to put the Zanac at risk of being hit by any bullets or enemies situated immediately behind the T-Cells. If you feel that the screen is getting too congested, and that you must find a way to clear it out quickly, you can always fly to one extreme side of the screen, lure the T-Cells away while firing at the enemies that advance on you, and crash into the T-Cells when the stage is relatively free of other potential dangers. 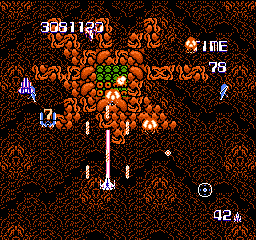 With just four Combo Cores, all grouped together in the center, this is a considerably weak fortress to deal with. Normally, you would make short work of this fortress in a matter of seconds. The thing that makes this fight more difficult is the presence of T-Cells which will continue to pour on to the screen. At times, you will have no choice but to crash into a series of them in order to clear the screen and make it possible for you to continue your attack on the cores. Once you destroy all four cores, the screen will flash, and you will advance on to the next area.