On certain levels you will have to fight super-sized aerial craft called Capital Ships. In a fixed place on each of those levels, a large craft will appear and zoom around the screen firing various projectiles at you in a fixed pattern. Your weapons will literally bounce off the surface of the craft; although they still do damage, this slows your rate of fire.

If you do not destroy a Capital Ship, it will depart at another fixed place later in the level. 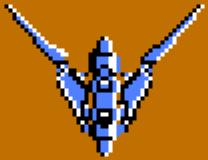 Maseru appears in the 2nd and the 11th Areas. Unlike other Capital Ships, it won't actively follow the player. Instead it teleports from one location to another. After warping into place, it scatters Leads around the screen 2 times before disappearing again. The longer Maseru stays onscreen, the less frequently it teleports.

Hume appears in the 5th and the 9th Areas. When it appears, it fires a series of rotating Leads throughout the screen at the Zanac ship.

Girevu appears in the 6th Area. It fires Leads from 16 different locations, all of which will pursue the Zanac ship. 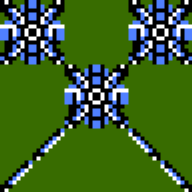 Soreido appears in the 7th Area. It deploys very strong bolts known as Super Hard Bolts. They drift slowly across the screen. It takes a good degree of patience to fight this enemy, because you must pull it away from the bottom of the screen so that you can get a good shot at it. Fortunately, its offensive power is relatively low due to the fact that its bolts can be avoided with careful maneuvering. 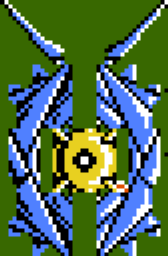 Somasu appears in the 11th and 12th Areas. This formidable enemy shoots three kinds of rotation bullets; Leads, Mios, and Beruos. While doing so, it slowly moves in on the Zanac ship's position. Can be rather dangerous if your ship is not upgraded.