170 points (2000 points if erased by the Enemy Eraser). Power Chips are what drive the Zanac's standard gun upgrades. The first five that you collect upgrade your gun's power. Any chips that you collect after five will not upgrade your weapons unless you collect 13 more while sticking with special weapon 0. Every time you collect a power chip, you will be granted one second of invulnerability. You can use this time to crash into other objects without harm or escape from tough situation.

Boxes will typically appear on the screen for every 16 enemies destroyed (2 enemies need to be destroyed to make them appear for the first time). They typically occur in threes, but it is not uncommon for them to appear alone as well. Boxes can have three different contents. Either they are empty, or they contain a Power Chip, or they contain two bullets that will fly forward when the box is destroyed. Boxes take five shots to completely destroy. However, you can determine the contents of the box after shooting it only three times. The box will begin to blink after taking three shots. If it flashes white, it contains bullets and if it flashes red, it's empty. The Zanac ship will only survive a collision with a box if it contains a Power Chip. Boxes that come in sets of three usually arrive every time certain amount of enemies are destroyed.

500 points. Sart crafts dive halfway down the opposite side of the screen that the Zanac currently occupies. They stop for a brief moment before traveling back up to the top of the screen. If you destroy them, the power level of the enemy will decrease slightly. The effect isn't noticeable until several Sarts are missed. Additionally, if you have more than 10 power chips, Sarts will be replaced with Cargos. Occasionally, they will transform into Blue Landers under the right conditions when you shoot it. If you shoot the very first Sart at the beginning of the game with your special weapon without ever firing your standard gun, it will transform into a Blue Lander. Note that Zart is also an aerial target and therefore crashing into it isn't a good option.

The conditions to make a Blue Lander appear are technically simple, but complicated to explain. The formula, for those who wish to know, is if the number of standard shots fired with your main weapon since the beginning of the game modulo 64 (i.e. divide by 64 and take the remainder), is equal to the 1000's digit of the score. This means you only have a 10 in 64 chance of this even being possible, since the 1000's digit can only ever be 0 through 9. 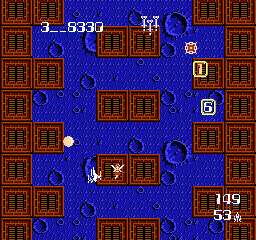 No points. When you collect these, Zanac will equip the Special Weapon corresponding to the number in the tile. Additionally, the ship will become temporarily invincible for roughly five seconds. If you collect a tile that corresponds to your current weapon, the level of that weapon will increase (up to a maximum level), and the amount of ammunition or time permitted will be set to maximum. Notice that, the weapon tiles from Weapon Distro look different from those dropped by Carrier that, the former is a bit reddish and the latter looks white.

500 points. Cargos are a special weapon delivery system. Unlike weapon distros, which scroll by at whatever speed your ship happens to be traveling at, Cargos travel at a constant speed relative to the flight of your ship and their flight pattern is identical to Sart. Therefore, they are usually easier to see and hit at high speeds. Cargos, like Sarts, fly from the top of the screen to the middle, pause, and fly back up. You must shoot a Cargo in order for the special weapon to be released and collected, or the Cargo will fly off the screen with the weapon. Cargos carry in each Special Weapon Tile in order from 0 to 7 and back to 0 again. They can, in same conditions like Sarts, spawn Blue Landers but in that case they won't release their weapon.

When you shoot at particular statues on the ground, known as Icons, an Enemy Eraser will be released from the statue. An Enemy Eraser is a ball of energy that, when touched, clears the screen of all aerial items except larger enemy craft, Special Weapon upgrades, other Erasers and Rio — it even removes any Power Chips, Boxes and Landers. Most Icons are Type 1, which have slit eyes and release Enemy Eraser. Every enemy and item destroyed onscreen with Eraser or its analogue adds to the score.

Once per level (except in Area 7), you will encounter a Type 2 icon, which has a a big grin. If you shoot it, it too will release an Enemy Eraser. If you immediately come into contact with this Enemy Eraser, it will act as a normal Eraser. However, if you wait a few seconds, the center of the Eraser will disappear. When you touch the remaining outside shell, you will instead be warped to another level and be invulnerable during the warping process. Notice that it may be a backward warp, so collect this at your own risk.

Once in a while if you shoot a square building on the ground, a fairy known as Rio will emerge. When you touch the Fairy, she will clear the screen just like an Enemy Eraser. After that, she will hang around until you reach the next base. The base will be automatically destroyed as soon as the timer starts; you will collect the normal bonus and then the Fairy will fly away.

No points (30,000 points if erased by the Enemy Eraser). Blue Landers are rare occurrences (see the Sart description above for more information). If you find one and collect it, you will earn one extra life. Furthermore, if you shoot at a Blue Lander long enough, it will transform into a Red Lander. In addition to granting you an extra life, a Red Lander will increase the automatic fire rate of the Zanac ship. At the start, Zanac is capable of firing 4 shots per second. The first Red Lander you collect will increase that to 12 shots per second, and then 15, 20, 30, and finally 60 shots per second. This will not effect how many bullets you may fire on the screen at one time, only how quickly they can appear which is useful when attacking heavily armoured enemies up close. You will not lose this upgrade even if you lose any of your lives.