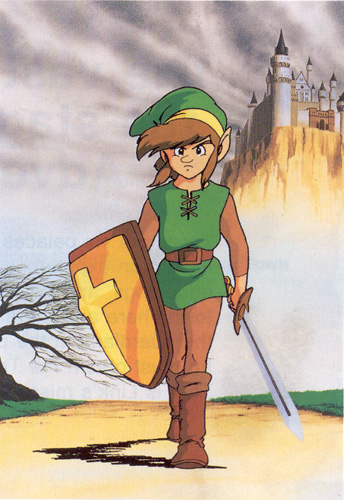 The Adventure of Link takes place several years after The Legend of Zelda. An older, taller and perhaps wiser Link has seen the county prosper and villages spring up. But peace is a fragile commodity in Hyrule and history has a way of repeating itself. On his second adventure, Link becomes a master of magic as well as a fighter. He visits many towns, fights new enemies and travels across the sea.

Marked by the sign on his hand, Link was destined to become a hero, but in the peaceful days following his first quest, he became restless. He wandered the forests, crossed the deserts and delved into the caverns of Hyrule, looking for clues to explain his feelings of unease. In time he became aware of a whisper that passed between the birds, beasts, and even through the blades of grass: there was a new magic in the land, nameless and terrifying.

Lying as still as marble, Princess Zelda slept the dreamless sleep of enchantment. When Link found her thus arrayed in the North Palace, he saw at once that she was spellbound. His greatest fear had come to pass. But refusing to reveal the secret power of the Triforce to a wizard, Zelda has brought on her own downfall. But all was not lost. If Link somehow unlocked the mystery of the Great Palace, he could save Zelda and the Triforce of Courage.

Again Link took to the fields and forests, but these places had become wild and dangerous, inhabited by enemies of old. Link found himself relying on his wits and swordplay at every step. Creatures he had never before seen waylaid him; spiders called Deelers that dropped from the trees, tall Geldarms that rose from the sands of the Tantari Desert, and of course the Moblins, armed with spears and hatred.

Link's mission was to enter each of the six palaces and restore a missing crystal to a statue. Together the statues created a magical lock on the Great Palace. Only by replacing the six crystals could Link open the final door. In each palace, however, he had to battle a Statue Guardian of great strength: Barba the Dragon, Iron-knuckle the Knight, Carock the Wizard and others.

As he closes the palaces, Link will have to cross the whole of Hyrule, from Ruto in the northwest to Death Mountain in the south, from the Island Palace in the Stormy Straights to Maze Island in the Far Eastern Sea. He must help villages whenever he can, but never lose sight of his ultimate goal. After finally uncovering the secrets of Old Kasuto, Link must push on to the Great Palace and face the legendary Thunderbird.