With the entire western continent of Hyrule explored, Link must search elsewhere for the location of the third palace. People in Mido Town speak of a guy named Error, living in Ruto, who may know something about reaching the Island Palace. After paying a visit to him, he mentions the King's Tomb. Perhaps that could be of some significance. 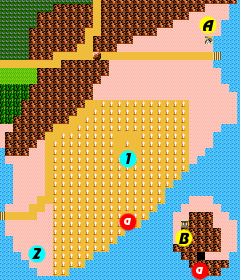 The cemetery is a scary place to be, with enemy encounters appearing quite close to you, making them difficult to avoid. If you are concerned about your health, all of the spaces adjacent to the King's Tomb are treated like roads, and will result in an empty encounter. Note that a 1-Up Doll

can be found to the south west of the cemetery along the beach (label 2 on the map).

One man in Mido Town suggests that you speak with Error in Ruto Town. It's a long trek, but Error tells you that south of the King's Tomb (label 1 on the map) exists a tunnel. Looking at the map, all you can see are tombstones, but if you actually walk south from the King's Tomb, you will fall into a pit (around the area labeled a on the map). This is the false grave.

Upon landing, a herd of Lowder will rush to attack you. You can easily make short work of them. Looking around, you find a very high tunnel to the right, and an exit to the left. If you did not learn the spell of Fairy from the Wizard in Mido Town, you will have no choice but to take the exit. If you have learned the spell, this is an excellent time to try it out. By transforming into a fairy, you become unable to attack, but you can fly around the screen, anywhere you like. Use this technique to climb into the high tunnel and exit out of the right side. In the second section, various creatures will get in your way, including one Blue Goriya who will make your exit difficult.

You will find yourself on a small island with a beach path that circles around to the opposite side. The Island Palace can be found here.

Both techniques learned in Mido Town, the Fairy  spell and the Downward Thrust, are essential to reaching and clearing this palace. High levels of power, magic, and health are also quite helpful. The first Key that you find will be trapped under stones, but this should be no problem. By combining the Downward Thrust with the Power Glove

, you can easily break through and grab the Key. Although the palace seems easy at first, the boss is a force to fear.

Fairy benefits
Not only can transforming into a fairy help you reach new locations, it has one other undocumented feature; Fairies can slip past locked doors. If you are struggling to find your way in a palace, and you come upon a locked door, you could transform into a Fairy and fly through the lock and on to the other side. This generally isn't recommended, however, for two reasons. First, there are enough keys in each palace for every door. If you keep looking, you are certain to find them. Second, considering each spell you cast grants you a one way trip through the door, you will need enough magic to cast Fairy again if you ever need to get back to the other side, unless it's a dead-end room with an item inside. And Fairy can be rather expensive to cast.

Off to a new world[edit]

Now that you've collected the Raft, it's time to explore the continents on the Eastern hemisphere of Hyrule. A dock awaits you just south of Mido Town. Head over to it and set sail.