With the hammer in hand, the remainder of Western Hyrule is now open for Link to explore, including the otherwise isolated port town of Mido as well as several caves whose entrances are blocked by boulders. Link would do well to spend his time exploring every inch of those caves and identifying the secrets they contain. 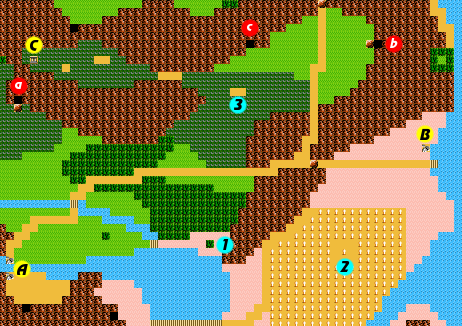 Assuming you are following along with the walkthrough, you will have left Death Mountain through Mido Cave on the right. That will deposit you on the west side of the long bridge that flanks the very bottom of the map above. To cross it, you will have to travel through two side scrolling segments. The left segment contains two Moblins while the right segment contains a deadly Daira. When you arrive on the opposite side, you will be standing before the great cemetery. A path along the west side of the cemetery allows for safe encounter-free travel to Mido Town. Chancing upon an encounter within the cemetery pits you against deadly experience stealing Moas. Escape from these encounters as quickly as you can.

Alternatively, if you collected the hammer and returned to Saria Town, you can follow the road north across the bridge, and then east to the boulder which blocks the path to Mido Town. Smash the boulder and you will be on your way to Mido.

Striking down
The Downward Thrust technique is especially useful against powerful enemies because it allows Link to attack them while remaining over their head and out of their range. Of course, the Downward Thrust isn't useful against all enemies. Skull headed Stalfos and the helmeted Ironknuckles are among those immune to this attack. More difficult enemies such as Red Dairas and the palace Goomas are susceptible to it, and can even be held in place until they are defeated if attacked just right.

Mido Town has two special lessons to teach Link. One is a magic spell, as usual, but the other is a powerful offensive technique that vastly improves Link's range of attack. One of the former soldiers of the Hyrule army hides in a sanctuary of Mido Town. As Link strolls through the town, he may notice a chapel with a door on the second floor. Ordinarily, Link cannot reach that door, but with the magic of the Jump spell, Link can reach the door with a little bit of a running jump. Once Link passes through the door, he will find the soldier in the back room. Upon speaking with the soldier, Link will obtain the Downward Thrust technique, which you can employ by jumping in the air and pressing

To obtain the magical spell of Mido Town, you'll have to do a little more leg work. An old woman will appear from the first house in the third segment, begging for someone to help her ill child. To provide your assistance, you'll have to trek back to the west side of Hyrule, specifically to a cave in the marsh which is blocked by a boulder (label a on the map). Smash the boulder with your Hammer and step inside. Be sure to learn the Downward Thrust technique first, because you will find a series of Dairas inside, guarding the precious contents of the cave. Knowing this technique will almost certainly make defeating the Dairas a less dangerous task. In the back of the cave, you will discover a flask containing a special kind of Medicine

: just the kind needed by the old woman in Mido Town. Return to her and present the medicine, and she will gratefully invite you into her home, where the Wizard inside will teach you the spell of Fairy, a magic which is not needed until you are ready to tackle the third palace, Island Palace.

On your way from Mido Town to Midoro Palace, there are a few locations worth noting. South of Mido Town lies the King's Tomb (label 2 on the map), which serves as an important landmark. To the west of the King's Tomb, on the other side of the mountains lies a patch of woods in the middle of a small beach (label 1 on the map), where a fairy can heal your wounds if necessary.

It would be wise to follow the road up to the north, and approach the boulder-blocked cave to the east (label b on the map). If you brave the depths of this cave, you will be rewarded with the second Heart Container

, which will increase your health meter from five bars to six. On the opposite side of the road lies another boulder in front of a cave. Smash the boulder and explore this cave to discover a more common, but nonetheless valuable 200 point bag.

On your way to Midoro Palace, you may notice some non-marsh areas which designate safe zones from enemy encounters. The path farthest from the palace itself (label 3 on the map) contains a red potion that someone dropped on the ground. Use the spell of Life before collecting it if necessary. Then continue on to the palace, stopping at the safe zones if you wish to minimize Link's contact with the enemy.

Before you enter this palace, try to ensure that your sword level is at least around 4. Otherwise, the battles of this palace will be very difficult. As you enter, strike the statue at the palace door. When you do, either a red potion or an Ironknuckle will appear. If it's an enemy and your health is low, run off to the left and return. Cast Life  before or immediately after collecting the Red Potion.

Note: In the original Japanese version of the game, this Helmethead only loses one helmet. A second Helmethead is encountered in the fifth palace with both helmets.

With the Power Glove in hand, and the second crystal in place, it's time to return to Mido Town, where more secrets can be learned concerning the whereabouts of the third palace.