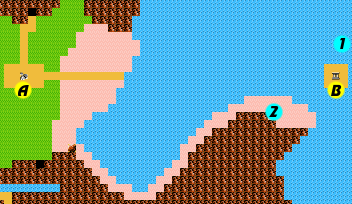 Once you are safely back at Nabooru Town, you can begin your search for the next palace. A man in Nabooru speaks of being able to walk on water with the boots. If you follow the trail that leads east out of Nabooru, you will find that you can indeed walk on the water. You are only permitted to walk on certain sections of it, however, but it is enough to get you to where you want to go.

Before you go directly to the palace, there are two locations worth checking out. It's difficult to find, but there is a small path that branches north out of the path to the palace, and then heads east. Just above the palace, you will find a small uncharted island (label 1 on the map) where you can find the third Heart Container

, which will extend your health meter from six to seven bars. Additionally, if you search the desert below the palace, you can find a P bag worth 500 points, but you'll need to cast Jump  in order to collect it.

This is one of the largest palaces in the entire game, second only to the Great Palace itself. As a matter of fact, there are two useless dead ends that you can avoid if you are trying to complete the palace quickly. Many point bags lie tantalizingly out of reach. Only expend the energy to collect them if you can afford it. 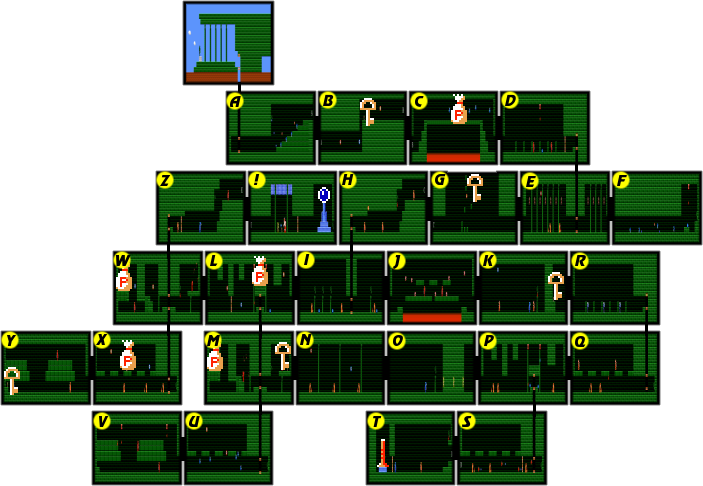 You have left the fifth palace with the very tool (Flute

) that you need to explore the remainder of Hyrule. You have heard many rumors about the River Devil, and its weakness to sound. Now is the time to put those rumors to the test.